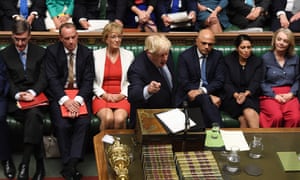 “Humbug”. That word may sink him. “Unfit” was Corbyn’s sombrely measured term. Brazen, brass-necked, thrashing about wildly in proclaiming the 11 supreme court justices “wrong”, Boris Johnson’s performance last night defied all democratic dignity. Add in your own outrage here, but most shocking of all was not the prime minister but the wall of Conservative hoodlums whooping and cheering him on. Conservative? These are law-defying anarchists willing to stir up violence in the country.

There was nothing spontaneous about the prime minister’s brutish attack-as-the-best-defence. When confronted by female MPs warning him against using language that spurs on daily death threats to them and their children, that only added to his glee. Misogyny is part of his focus-grouped assault on every kind of political correctness, though it comes naturally to a man whose worst insult is “girly”.

How ‘girly swots’ came back to bite Boris Johnson

Some MPs were in tears after Paula Sherriff, the MP whose constituency is next door to the assassinated Jo Cox’s, warned that those people who threaten her “often quote his words, surrender act, betrayal, traitor and I for one am sick of it. We must moderate our language and it has to come from the prime minister first”. But he had never heard “such humbug in all my life”. Every time his incendiary language was challenged, he taunted them back by referring to the Benn Act, passed by a majority of the House, as “the surrender act”.

The most grievous affront came in answer to Tracey Brabin, Jo Cox’s successor MP: “The best way to honour the memory of Jo Cox and indeed the best way to bring this country together would be, I think, to get Brexit done.” The idea that the strong pro-EU campaigner who was shot and stabbed to death by a far-right anti-EU terrorist should be commemorated by Brexit had Jo Cox’s husband calling for moderation: “I feel a bit sick at Jo’s name being used in this way” he tweeted, quoting her famous dictum, “Always hold on to what we have in common.”

If his party had some notion that the mantle of office would sober up this self-intoxicated scoundrel, they were wrong. If they thought charm and wit would be his winning political weapons, they were wrong. Not a scintilla remains of that “one nation”, “healing” and “bringing the country together” guff he talked in the leadership campaign. This is two-nation politics, deliberately driving the rift ever deeper. This is calculated contempt for parliament and the judiciary, designed to stir anger among his Brexit base outside against that imagined “elite”. That’s the definition of demagoguery, turning voters into “the mob” to force his way where he finds democratic and judicial processes barring his wishes.

Will it work? We have to believe it will shock more citizens than it inflames, and women especially will be revolted by his sneering contempt for violence against them. He hardens the battle line between the sides, making compromise near-impossible. In the House that is his intent, to make striking a deal with the EU more difficult and gaining support for any deal from many on the Labour benches improbable: will they really cross the floor to back a deal that keeps this brute in office? His behaviour suggests a no-deal Brexit is what he truly wants. Inevitably the Tory party chairman, James Cleverly, floundered on the Today programme this morning in his defence.

Johnson’s strategy, devised with his unwise adviser Dominic Cummings, is to act so savagely that he provokes Labour into calling a vote of no confidence, as time and again he goaded Corbyn for cowardice, too frit to face the voters. Neither Labour nor the other opposition parties will be so foolish: they will call an election only when the no-deal danger has been delayed with an extension to the 31 October leaving date.

To date, the PM’s every tactic has been a disaster: losing every vote, his proroguing of parliament failed, blundering into the supreme court’s damning verdict. The net effect last night was yet again to bolster Jeremy Corbyn’s standing, his calm dignity of language casting Johnson as the wild-man extremist. The prime minister bawling insults at him as “a communist” fails when in front of everyone’s eyes is a grownup refusing to be riled by this spoilt adolescent.

“PM Flays Scared Corb on Election”, claims the Sun’s front page but I doubt that’s what its readers saw on their screens. The Mail trumpets a poll showing that 64% of Labour voters want an election. So does the Labour leadership, and Johnson can have one any day he chooses – as long as he goes to get an EU extension first.

What next, no one knows. But whether the Conservative party can ever regain its dignity is yet to be seen: expect nothing but raucous endorsements at its upcoming conference. The most shameful sight of the night was their MPs’ behaviour, with Jeremy Hunt rising to back Johnson’s antics with no hint of reprimand, after Jacob Rees-Mogg shamelessly accused the supreme court of conducting a “constitutional coup”.

Those who have left look back on their old party with horror: Amber Rudd warned yesterday of Johnson’s “dishonest and dangerous” language, but they have all quit. New candidates to replace the 21 departed will be of the Johnson stamp, chosen by the same aged firebrands who foisted this unspeakable prime minister on the country. It was never more imperative that this party should be resoundingly defeated at the next election – and that will take tactical collaboration by a progressive alliance of opposition parties. Johnson last night will have helped forge that determination.

• Polly Toynbee is a Guardian columnist