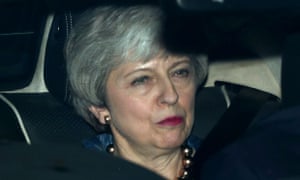 Theresa May’s mutinous MPs are warning her that they will move to oust her within weeks if the UK is forced to take part in European elections next month and extend its EU membership beyond the end of June.

Tory MPs are increasingly angry at the prospect of voters being asked to go to the polls to elect MEPs three years after the Brexit referendum, in an election they fear will be boycotted by many Conservatives and be a gift to the far right and Nigel Farage’s new Brexit party. Senior Tories said one silver lining of a long extension would be that it would allow them to move quickly to force May out, and hold a leadership election starting as soon as this month.

The warnings came as the prime minister made a last desperate appeal on Saturday night to MPs to back a deal, saying there was an increasing danger Brexit would “slip though our fingers”. May said: “Because parliament has made clear it will stop the UK leaving without a deal, we now have a stark choice: leave the European Union with a deal or do not leave at all.

“The longer this takes, the greater the risk of the UK never leaving at all. It would mean letting the Brexit that the British people voted for slip through our fingers. I will not stand for that. It is essential we deliver what people voted for, and to do that we need to get a deal over the line.”

Conservative MP Nigel Evans, an executive member of the 1922 Committee of backbenchers said on Saturday night that, if May failed to deliver Brexit and all she could do was secure a long extension at an EU summit on Wednesday, she would face overwhelming pressure to step down. “At the moment there is focus on delivering Brexit, but if a long delay becomes a reality I believe the noises off about removing the prime minister will become a cacophony,” he said. “I and many other Conservatives would prefer leaving the EU on World Trade Organisation terms to any humiliating long extension that forces us to take part in the European elections.”

Nigel Adams, a former minister who quit last week over May’s decision to hold talks on Brexit with Jeremy Corbyn, said: “Over 170 Conservative MPs including cabinet ministers signed a letter to the PM last week urging her to ensure the UK does not take part in the European elections. Doing so will not end well.”

With discussions on Brexit between the government and Labour appearing to have stalled on Friday, there are fears among senior Conservatives that EU leaders will demand the UK remains in the EU for up to a year and takes part in European elections, unless parliament can agree a Brexit deal before 22 May.

Last month May told Tory MPs that she would stand down once Brexit had been delivered. If there was a lengthy extension to membership, the Tory party rulebook means she could not be forced out before December if she wished to go on. But an increasing number of her MPs and ministers believe her time would be up.

It is also understood that the foreign secretary, Jeremy Hunt, a potential frontrunner to succeed May, has been informing backbenchers that he would prefer to leave on WTO terms rather than accept a long extension and made this clear in cabinet discussions last week.

Sir Graham Brady, chair of the 1922 Committee, told the Observer: “British participation in European elections three years after a majority of the British people voted to leave the EU would be a massive political mistake. The results for the mainstream parties would be likely to be poor and more extreme parties would be looking forward to a massive opportunity.

“Everything should be done to ensure the UK leaves in the near future, obviating the need to participate in the European elections.”

On Saturday night Downing Street said discussions with Labour to find a Brexit compromise that could pass through parliament before Wednesday’s EU summit were “ongoing” at a technical level, but declined to be drawn on whether there were any plans to hold votes tomorrow or Tuesday, before May heads to Brussels.

In an attempt to persuade Labour to sign up to a deal, No 10 is offering to enshrine in law a plan that would hand parliament a say in future trade talks with the EU. They believe it would stop a new Tory leader, such as Boris Johnson, shifting to a harder Brexit once May has been replaced.

Meanwhile the new Independent Group of 11 former Labour and Tory MPs said it had been approached by more than 200 people, including one former Tory minister, who wanted to stand for the embryonic party in the European elections. It sees the elections as a chance to mobilise remain voters and make its first electoral breakthrough.