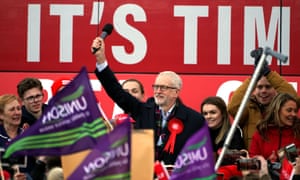 Election candidates: who is running in my area?

Boris Johnson’s campaign took a festive turn as he visited a South Wales firm which is said to be the Queen’s Christmas cracker supplier, the Press Association reports. He helped box up rolls of wrapping paper – a case of putting round tubes in a square hole – before joining staff at IG Design Group in pulling crackers. The PM read out the joke in one of the crackers, asking: “What can you make that cannot be seen? The answer is a noise.”

As PA reports, the noise of laughter was not heard, so the PM added: “What can you get done by Christmas? Brexit.” Some laughter was heard at this point, with Johnson commending those who got the “right answer”.

Discarded on the floor nearby was another of the pieces of paper from a cracker, which had as its charade prompt the movie The Good, The Bad And The Ugly”.

Here is the Paul Williams, the Labour candidate in Stockton South, a Labour-held marginal, welcoming the fact that he has had an endorsement from his Lib Dem opponent. (See 12.23pm.)

***Breaking news*** my Liberal Democrat opponent has been even more explicit in endorsing me in the Tory/Labour marginal in Stockton South https://twitter.com/BrendanDevlin50/status/1204707745036943360 …

To be crystal clear: vote tactically for someone who cares about the NHS and social care. Those are important in Stockton South.

615 people are talking about this

This move has been backed by the Vote for a Final Say campaign, which wants a second referendum on Brexit. It has released this list of constituencies where it is urging the third-placed candidate to “step aside” for the person who has the best chance of beating the Tories.

Unlike many news organisations, we chose an approach that keeps all our reporting free and available for everyone, regardless of where they live or what they can afford. You’ve read 22 articles in the last two months. We need your support to keep delivering quality journalism, to maintain our openness and to protect our vital independence. Every reader contribution, big or small, is so valuable.

Support us today from as little as €1. Thank you. Make a contribution – The Guardian