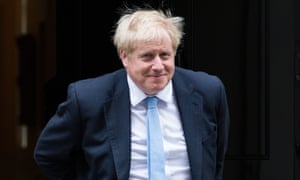 The Brexit negotiations are to resume with Boris Johnson still fighting to bring the Democratic Unionist party onboard with his deal with Brussels.

“The teams worked into the night and continue to make progress. They will meet again this morning,” a UK government official said.

The prime minister has the basis of a deal with the European commission after making major concessions to Brussels over the Irish border.

The deal would, however, create a customs border down the Irish Sea. A similar arrangement was rejected by Theresa May as a deal that no British prime minister could accept and the DUP made clear its reservations on Tuesday evening.

In a statement released after a 90-minute meeting at No 10 on Tuesday night, the DUP said it could not give detailed commentary amid ongoing negotiations but “it would be fair to indicate gaps remain and further work is required”.

Negotiators in Brussels worked until 2.30am London time and resumed talks on Wednesday morning. The EU’s chief negotiator, Michel Barnier, is due to tell ambassadors for the 27 member states at 1pm whether there is an agreement to be signed off by leaders when they meet at a summit on Thursday.

The prime minister is expected to brief his cabinet on the situation at 4pm before addressing a scheduled meeting of the 1922 Committee in the evening.

Despite the DUP’s observations, Downing Street hopes that pro-Brexit Conservative MPs will back the agreement under discussion.

Steve Baker, the leader of the ERG, had emerged from a meeting in No 10 saying he was “optimistic that it is possible to reach a tolerable deal that I am able to vote for”, and later told fellow Eurosceptics to “trust in” the prime minister.

Under the deal being negotiated, Northern Ireland would not be part of the EU’s customs territory, but the bloc’s full customs code would have to be enforced in the Irish Sea.

“Northern Ireland would de jure be in the UK’s customs territory but de facto in the European Union’s,” one diplomatic source said of the tentative agreement.

The DUP’s nervousness is matched in Paris and Berlin. Speaking in Paris, a senior French official advised “extreme prudence” about the chances of a deal being struck that would satisfy the EU’s capitals.

The EU member states are yet to see the legal text that Barnier had demanded.

“It’s not the Irish who will make the deal,” the official said. “Yes, there are better atmospherics, but what matters is the content, and we have seen nothing yet. Whatever it is, we will want to look at it in very serious detail.”

German government officials said reaching a deal this week was an ambitious target and that agreeing on the technical issues could require another two months of talks, unless the UK made big enough concessions.