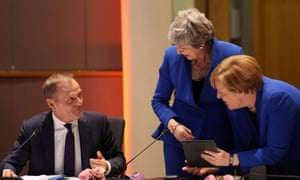 Theresa May will attempt to cling to power during the Brexit delay as Conservative sources said she was sticking by her pledge to see through the first phase of talks and pass a withdrawal deal.

As EU leaders gathered to discuss an extension to article 50 of about nine months, May dropped her promise not to allow a delay to Brexit beyond 30 June while she was prime minister.

However, she is abiding by her decision to step down only once a Brexit deal with the EU has been passed by parliament, meaning she looks likely to stay on and keep trying to push through a withdrawal agreement for as long as it takes.

Arriving at the talks, May signalled she would accept a much longer delay from EU leaders – expected to be nine to 12 months – as long as there was a “break clause” allowing the UK to leave as soon as MPs approve a deal with a meaningful vote.

“What matters, I think, is I have asked for an extension to 30 June but what is important is that any extension enables us to leave at the point at which we ratify a withdrawal agreement. So we could leave on 22 May and start to build our brighter future,” she said.

EU sources said May had not pushed back against the suggestion of a long extension in her address to the other 27 leaders, instead insisting that her priority was to be able to leave once the withdrawal agreement was approved. The prime minister also asked the leaders to avoid a situation in which she would have to return to Brussels to ask for a further extension.

The prime minister’s position is likely to cause alarm among pro-Brexit Conservative MPs who are plotting to oust her as soon as a long delay to Brexit is agreed. But in practice, it would be difficult for them to remove her as leader until December because she won a vote of confidence last year and cannot be challenged again for another 12 months.

On the other side of the debate, senior Tory figures fighting against a hard Brexit are anxious to keep May until the UK leaves the EU in order to prevent her successor opting for no deal. David Gauke, the justice secretary, told the BBC on Wednesday that the party should not be “rushing to change our leader” if uncertainty remained about the first phase of the negotiations. “If it helps the country for her to stay, she will stay,” he added.

EU leaders have also been concerned that a hard-Brexit prime minister such as Boris Johnson or Dominic Raab could cause trouble in Brussels during any extension period to article 50, ignoring May’s promises of sincere cooperation.

The Guardian understands that the Conservative party rules that protect May from a leadership challenge until 12 December were a motivating factor in the offer of a lengthy Brexit delay up until the end of the year, backed by the German chancellor, Angela Merkel.

Despite the frustration with Downing Street, a senior EU diplomat said May was trusted as “a responsible politician” who would respect Britain’s obligations of “sincere cooperation” as a member state during the extra period of membership. “A rogue UK is not a likely scenario under Theresa May,” one senior diplomat said.

A senior Conservative source said May felt a sense of urgency and pressure to get a withdrawal deal passed as soon as possible to enable the UK to leave before the European elections next month or when MEPs take up their seats in June. However, he repeated the pledge that the prime minister was only promising to stand down once the first phase of Brexit was over.

“As a point of fact, when she made the announcement at the 1922 [Committee] and in front of parliament that she was prepared to stand down as prime minister once we had completed phase one of the negotiations and for there to be a new leadership in place for phase two, effectively that is the ratification of the withdrawal agreement. That remains the case,” the source said.

“She understands that the Conservative party feels a sense that new leadership is required for the second phase of negotiations. That was the commitment she gave to her parliamentary colleagues and that’s one she stands by.”

May made the case for a short extension to Brexit by promising that talks with Labour to reach a deal are genuine. No 10 is insistent that it is still possible to pass a version of the withdrawal agreement on the back of Jeremy Corbyn’s support, with talks between the government and opposition expected to continue on Thursday.

However, the two sides are still a long way apart. Labour wants movement on a permanent customs union, regulatory alignment, protection against a future leader unpicking a deal and the possibility of a confirmatory referendum.

As the EU27 leaders talked deep into the night, a split emerged between Paris and Berlin about whether to believe May’s assurances.

Merkel clashed with the French president, Emmanuel Macron, both over Berlin’s insistence that May’s government can be trusted, and that a no-deal scenario should not be risked by offering up only a short delay.

Merkel argued that a short delay would not offer any prospect of the impasse in Westminster being broken and the delay should instead end on 31 December.

The German chancellor claimed that the biggest incentive for Conservative MPs to back the deal lay in the threat of having to hold European elections due to a failure to complete Brexit.

Macron instead warned against a long extension, arguing that a no-deal threat should remain. Sources suggested that Paris had “gone in hard”, suggesting that there should only be a short extension up to the European elections.

The French president also insisted on the redrafting of the EU’s summit communique, writing in that the UK – during any extra time as a member state – would have to “refrain from any measure which could jeopardise the attainment of the union’s objectives, in particular when participating in the decision-making processes of the union”, according to a leak obtained by the Guardian. The EU27 also emphasised their right to meet without the UK on key long-term decisions.

The differences in the Franco-German axis had been evident earlier in the day when Merkel told the Bundestag that May was likely to get a longer extension than she needed, while Macron told reporters on arrival at the summit that “nothing had been decided”, dismissing talk of a long extension as “rumours”.

Macron insisted on “clarity” from May about what Britain wants, warning: “Nothing should compromise the European project.”

Sorgente: Theresa May stands by pledge to cling on until Brexit deal is done | Politics | The Guardian