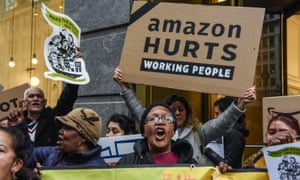 Two lawmakers from Amazon’s hometown in Seattle traveled to New York on Monday to warn the city of potential unintended consequences of the tech company’s planned new headquarters.

Lisa Herbold and Teresa Mosqueda, members of Seattle’s city council, addressed a summit of activist groups fighting Amazon’s plan for a new campus in Long Island City, Queens. They told the New Yorkers that Amazon’s presence in the west coast city had driven up housing costs, that the company had ducked efforts to make them help pay to address the crisis, and that they should resist it.

At the event at the offices of the Retail, Wholesale and Department Store Union, which is attempting to organize workers at a Staten Island Amazon warehouse, the council members urged their New York counterparts to learn from Seattle’s mistakes and demand concessions like labor standards before the company gains a foothold in the city.

“Don’t be the city or state that flinches every time a corporation flexes its muscles,” Mosqueda said.

“You have the opportunity that Seattle didn’t,” she added. “We didn’t respond fast enough.”

Amazon opted to split its vaunted HQ2 into two campuses, in New York and Arlington, Virginia, at the end of a nationwide competition. In Long Island City, the company plans to hire 25,000 employees making an average wage of $150,000. The state and city have promised it up to $3bn in tax breaks and public subsidies, sparking a backlash among local politicians, labor unions, and activist groups.

But public opinion polls show that a majority of voters back the project, and Amazon has launched an ad campaign touting the benefits it says it will bring, including $27bn in tax revenue.

In Seattle, Amazon occupied 20% of the city’s office space, the politicians said. They said New York could expect many of the well-paying jobs to go not to existing city residents, but to people who will move there. A thousand people a week move to the Seattle region, with an influx of more than 115,000 since the beginning of the decade, Mosqueda said. 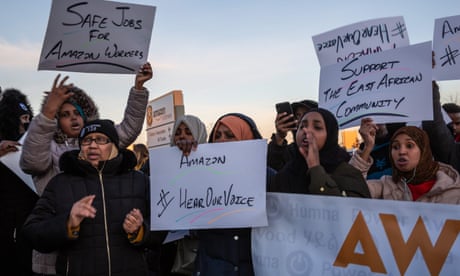 ‘We are not robots’: Amazon warehouse employees push to unionize

“The majority of the population that was living in Seattle who were low income, working families has been pushed out … to areas where they are still now having to commute one and two hours into their jobs,” she said.

The less affluent have been pushed to areas south of the city, as housing costs have jumped – from 35% above the national average in 2012, to 113% above last year. The median cost of a home is $740,000, according to the lawmaker’s presentation.

“More families are getting pushed further and further out, and the demographics in Seattle are dramatically changing,” Mosqueda said. “It’s getting whiter, and it’s getting richer.”

Seattle moved to impose a $275-per-employee “head tax” on large employers like Amazon to help pay for homeless services and public housing, but repealed it under heavy opposition from the company.

“Our employee hours tax proposal was a threat to Amazon because it could be replicated all over the country,” Herbold said. “We simply weren’t able to counter the influence of big money on public opinion.”

Amazon did not respond to a request for comment.

… we’re asking readers to make a new year contribution in support of The Guardian’s independent journalism.

Three years ago we set out to make The Guardian sustainable by deepening our relationship with our readers. The same technologies that connected us with a global audience had also shifted advertising revenues away from news publishers. We decided to seek an approach that would allow us to keep our journalism open and accessible to everyone, regardless of where they live or what they can afford.

More than one million readers have now supported our independent, investigative journalism through contributions, membership or subscriptions, which has played such an important part in helping The Guardian overcome a perilous financial situation globally. We want to thank you for all of your support. But we have to maintain and build on that support for every year to come.

Sustained support from our readers enables us to continue pursuing difficult stories in challenging times of political upheaval, when factual reporting has never been more critical. The Guardian is editorially independent – our journalism is free from commercial bias and not influenced by billionaire owners, politicians or shareholders. No one edits our editor. No one steers our opinion. This is important because it enables us to give a voice to those less heard, challenge the powerful and hold them to account. Readers’ support means we can continue bringing The Guardian’s independent journalism to the world.

Please make a new year contribution today to help us deliver the independent journalism the world needs for 2019 and beyond. Support The Guardian from as little as €1 – and it only takes a minute. Thank you.