Parliament set for Brexit showdown on 19 October | Politics | The Guardian 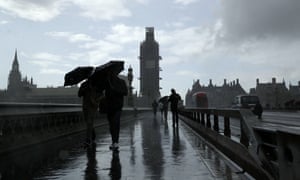 MPs are heading for a Brexit showdown as they will be called to sit for a special parliamentary session on Saturday 19 October – less than two weeks before Britain’s scheduled departure from the EU.

The sitting will happen two days after the EU summit and, with Boris Johnson’s attempts to strike a Brexit deal all but dead, is likely to be a decisive moment in determining the country’s future.

Cabinet ministers are privately concerned at suggestions the prime minister may try to circumvent the Benn act – passed into law last month – which is aimed at forcing him to request a Brexit delay if he fails to reach a deal.

According to the House of Commons website, Parliament has sat only four times on Saturdays in the past 80 years — including the day before the outbreak of World War Two, the Suez crisis in 1956 and for the invasion of the Falklands in 1982.

Johnson has always insisted the country will leave the EU on 31 October but No 10 also says the prime minister will comply with the law.

His hopes of securing a breakthrough in crunch Brexit talks were dealt another blow when the Irish finance minister said his government did not want any customs checks in Ireland.

Paschal Donohoe denied his government was trying to trap Northern Ireland into a closer relationship with the EU and separate it from the UK by trying to prevent customs or tariff checks.

Johnson is to meet the Irish prime minister, Leo Varadkar, on Thursday and try to persuade him to agree to plans which the British government argues need to include some form of Irish border checks, with a potential no-deal Brexit just weeks away.

Asked whether his government held the position that there could not be any customs checks in Ireland, Donohoe told BBC Radio 4’s Today programme: “Firstly in terms of the charge that the Irish government is trying to trap anybody in any kind of arrangement, that is absolutely not the case.

“We, of course, utterly respect the decision that the British people have made to leave the European Union, as a country that has much experience of referenda ourselves.

“The so-called backstop was always an insurance policy but, equally, yes, you are correct to say that we do not want to see the return of customs checks and tariffs on our island.”

Asked to clarify whether he meant he did not want customs checks anywhere, he replied: “Well, I would say on Ireland. The reason for that goes beyond economics, it goes beyond trade. It goes back to the kind of experience my country and I have gone through in my own lifetime where I have seen those kind of things and the erosion of the all-Ireland economy becoming a catalyst for the kind of political challenges on our island and in Ireland that I don’t want to return.”

Pressed on what the point of Varadkar’s meeting with Johnson was, given the Irish position, he replied: “Because the stakes are so high that constructive engagement is the only choice, because the stakes of what this could mean not only for shared history between both countries that are so precious but for a shared future which we want to see continue in the future while we take our different journeys with respect to Europe.

Asked to confirm whether the Irish would accept customs checks if they were enforced by the EU in the event of a no-deal Brexit, he replied: “Well, what we have indicated is that if we are in a no-deal setting, we’ll have to put in place some kind of arrangements to ensure that we can give confidence to, for example, French shoppers that Irish lamb that is leaving Ireland is Irish lamb.”

Asked to clarify whether some form of “arrangements” in effect meant a customs check, he said: “Well, we have to engage and we’re working with the European commission on what those things could be that will give confidence regarding the future of our economy.”