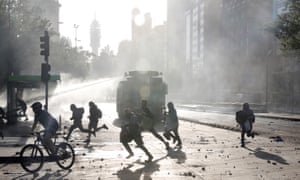 After 12 days of mass demonstrations, rioting and human rights violations, the government of President Sebastián Piñera must now find a way out of the crisis that has engulfed Chile.

Analysts have correctly interpreted the wave of protests as a reflection of discontent with the material, political and social inequalities engendered by the economic model imposed by the country’s former dictator Augusto Pinochet. 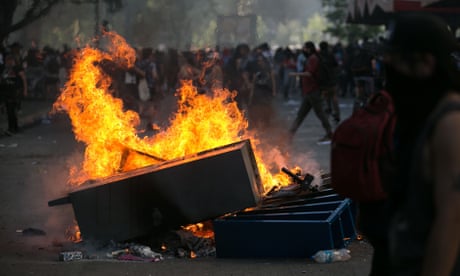 ‘They smashed me in the head’: anger at Piñera as Chile’s bloodied protesters allege brutality

That model deregulated markets and privatised social security systems, and was widely emulated by other countries in the region.

Now the Piñera government has the chance to transform the exhausted Chilean model and lay the foundation of a real welfare state, giving Chile a chance to become a genuinely developed country – not one which has merely seen an increase in GDP per capita.

Chile is notorious for its income inequality: the gap between rich and poor has widened in recent years as the combined wealth of its billionaires is equal to 25% of its GDP.

But inequality is multidimensional: Chile’s employment rate languishes at 55%, while employment conditions are so precarious that 50% of the workforce cannot possibly accumulate enough savings to fund a minimally adequate pension.

Thirty per cent of formal contracts are short-term and last an average of just 10 months, interspersed with lengthy periods of unemployment, leaving workers one step away from poverty if they become ill or unemployed.

They feel excluded and ignored by political power, which is highly concentrated among the elite. They feel cheated and exploited by firms and retailers, who have fixed prices for basic consumer goods.

Many Chileans live with high levels of debt and thus pay more for the same services (such as higher education or healthcare) than rich people, who get discounts because they can pay in cash.

But perhaps most importantly, they feel discriminated against and humiliated in all these areas as they battle with inadequate public services that fail to level the playing field.

The result is that the expectations for a better and more secure life have outpaced the opportunities for social mobility that the Chilean model actually delivers.

By now it should be obvious that in a (thankfully) fiscally balanced country, these inequalities cannot be overcome by patching up the deficiencies of the economic model through the country’s limited fiscal resources, which have stagnated at approximately 20% of GDP, compared with the OECD’s average of 34%.

Reforms such as increasing minimum wages or pensions through fiscal resources will fail to make a dent in inequalities generated by privatised social protection systems that barely share risk between their beneficiaries.

Nor will they help informal workers, who desperately require an earned income tax credit to motivate them to engage in formal and stable employment, while giving a significant redistributive boost to their disposable income.

A significant proportion of contributions to social systems must now go towards sharing risk equally among the population so that rich and poor can receive the same level of care in hospitals, receive pensions that are a guarantee of old-age security and have the same chances of obtaining a good education.

This is the basic premise of public services as they exist in every developed country in the world.

But structural reforms are difficult to implement in any country, especially when the government does not command a majority in Congress. Most importantly, they require a social and political consensus.

The rage felt by marginalised youth explains – although does not justify – the violence that erupted during the protests, and it is accompanied by sharply declining credibility and trust in institutions, including all political parties.

Piñera now has a tremendous opportunity to generate the kind of social pact that could sustain such reforms, as requested by representatives from over 300 civil society leaders.

This week, he took an important step in this direction by reshuffling his cabinet to include younger and more liberal ministers, who have the ability to think creatively, establish a social dialogue and engage with civil society in a way that generates a new social pact. However, they should not be in this task alone.

Politicians from across the political spectrum must support such a pact. But it will be up to the president to lead the country in this process and make use of the opportunity that this crisis has generated.