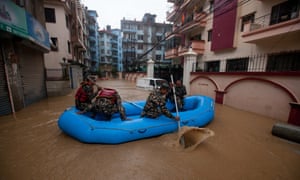 Millions displaced in India, Nepal and Bangladesh, with Assam and Bihar among the worst-hit regions

More than 100 people have been killed and millions more affected by devastating floods and landslides across India, Nepal and Bangladesh.

In the Indian state of Assam, among the worst hit areas, agencies were working on a war footing to deal with the situation, the chief minister, Sarbananda Sonowal, said.

About 4.3 million people in Assam, in north-eastern Indian, have been affected by flooding, while 83,000 have been forced to seek shelter in relief camps on higher ground.

In Bihar, east India, a further 2.56 million people were hit by flash floods, with many homes quickly submerged waist-high in brown water.

“Floods have turned our homes into a hell,” said Rupesh Jha, who lives in Araria district in Bihar. “We are somehow eating and using makeshift boats to go outside to defecate in the flood water as we have no alternative,” he said.

“What has further added to our problem is that there has been no electricity in our homes for the past one week since waters flooded our homes,” he said, adding that food supplies from government were lacking.

Floods entered his home on 12 July, he said. “Very soon we were left in the waist deep water.” Many of his neighbours fled their homes with their cattle and few belongings.

Every year, floods cause deaths and force huge numbers of people to flee their homes across South Asia. It is feared the death toll and damage from the monsoon season, which has just begun, is likely to increase in coming weeks.

Floods in Nepal, India and Bangladesh during the 2017 monsoon killed at least 800 people and destroyed food crops and homes.

“We have taken shelter in schools, temples and other higher places as our homes are flooded. We are very worried about our belongings left in our homes since there are none to protect them,” said Rakesh Kumar Singh, from Sitamarhi district in Bihar.

Most of his neighbours’ homes have been destroyed. “We are somehow surviving on government midday meals at a local school,” Singh said. Midday meals are usually offered free to children enrolled in government schools, but are being rolled out to communities affected by floods.

“Floods have always been a challenge for us and we have faced it bravely. This time too we will overcome the problem,” Amrit said.

A staff member working on the response in Assam said the numbers of people affected were higher than last year. Emergency provisions – such as rice, dal, baby food, water purification tablets and sanitary products – were being handed out at distribution points and relief camps. Water pouches were also being distributed in remote areas. 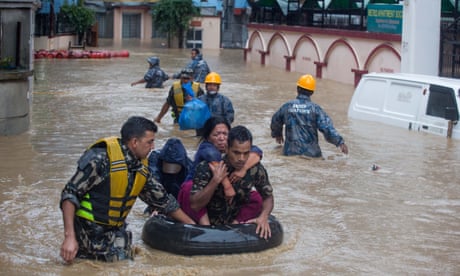 Flood waters in Assam rose overnight with the Brahmaputra River, which flows down from the Himalayas into Bangladesh, and its tributaries still in spate. Most of the Kaziranga national park, home to the rare one-horned rhino, was underwater, authorities in Assam said, adding that four people drowned on Monday.

Across the state, 12 rivers are reported to be flowing above danger levels following heavy rainfall over the past week. About 1.5m hectares of crop land have been submerged, according to initial assessments, while schools and health facilities have been damaged.

The Indian weather office has forecast widespread rains across Assam and Bihar over the next two days.

In neighbouring Nepal, 64 people have been killed and 31 are missing, with about a third of all districts hit by heavy rains, authorities say. Many of the deaths were caused by landslides that swept away houses.

Across Bangladesh, the devastating rains have affected tens of thousands of people. Last week, dozens of people, mostly farmers in rural areas, were killed by lightening.

The severe weather has also hit Cox’s Bazar district, in southern Bangladesh, where about 700,000 Rohingya refugees who fled violence in neighbouring Myanmar, are living in refugee camps.

Sorgente: Death toll from floods in south Asia rises to more than 100 | Environment | The Guardian