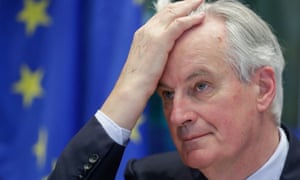 Michel Barnier has said a no-deal Brexit is “very likely” and becoming more likely by the day after the Commons rejected all the alternative solutions to Theresa May’s deal.

Speaking in Brussels, the EU’s chief negotiator said there had to be a “positive vote” by MPs in order to avoid a cliff-edge Brexit on 12 April.

“No deal was never our desired or intended scenario,” Barnier told an audience at a thinktank event. “But the EU27 is now prepared. It becomes, day after day, more likely.”

Three scenarios were set out by the EU official: agreement this week on the prime minister’s deal or a variant of it, no deal, or a long extension to article 50 requiring “a strong justification”.

Such is the frustration in EU capitals at the failure of Westminster to coalesce around a vision of its post-Brexit future that it increasingly appears that a lengthy delay beyond 22 May can only be guaranteed in the event of a general election or a second referendum.

Barnier said an extension beyond the end of May, requiring the UK to take part in European parliamentary elections, “would carry significant risks for the EU and therefore strong justification would be needed”.

He said businesses in the EU had warned Brussels “against the cost of extending uncertainty”. The UK prolonging its status as a member state while still seeking to leave with a negotiated deal “could pose a risk on our decision-making autonomy”.

“The option of no deal looks very likely’, he later added.

On Monday night, all four options put to the Commons to break the Brexit impasse were rejected by MPs, although by small margins, raising some hope that a solution might be found later in the week.

Barnier pointed out that the European commission president, Jean-Claude Juncker, said on Monday that the EU’s patience had reached its limit. “Personally, as the negotiator, I have some patience left.”

The customs union motion tabled by the Conservative former chancellor Ken Clarke was rejected by a margin of only three votes, 273 to 276, while a second Brexit referendum fell short of a majority by 12 votes.

MPs are expected to attempt to hold indicative votes again on Wednesday, with the options likely to have been narrowed further. Should parliament back a customs union, swift changes to the political declaration on the future relationship with the EU could be made.

“You will have noticed last night that the proposal to reach an agreement on a customs with the EU was lost just by three votes”, Barnier said.

However, during a five-hour cabinet session on Tuesday, the prime minister is also likely to suggest her deal is put in a runoff against an agreement backing a customs union, in an attempt to finally secure ratification for her deal.

Barnier suggested that in either case, the UK could still leave the EU by 22 May to avoid having to hold European elections.

“We’ve always said we can accept a customs union or a relationship along the style of the Norway model,” he said. “The political declaration can accommodate this today.”

He made clear that in the event of a long extension of article 50, the EU would not open negotiations on the future trade deal, which it has maintained can only happen after the withdrawal agreement is settled.

In the case of a no-deal Brexit, he said he would expect the UK to try to return to the negotiating table a few months later, but “in that case the withdrawal agreement we put on the table at the beginning of this negotiation will be still here: citizens’ rights, Ireland, financial obligations”.

Barnier lamented the lack of debate in the UK about its post-Brexit relationship with the EU either during the referendum or in the months after it. “There’s no obligation in leaving the EU to leave the customs union, no obligation to leave the single market. I didn’t see the debate about what are the national interests of the UK.”

Guy Verhofstadt, the European parliament’s Brexit negotiator, tweeted on Monday evening: “The House of Commons again votes against all options. A hard Brexit becomes nearly inevitable. On Wednesday, the UK has a last chance to break the deadlock or face the abyss.”