The controversial plan to redevelop Checkpoint Charlie | Cities | The Guardian 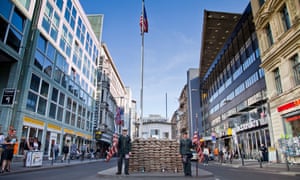 Three decades after the Berlin Wall fell, the crossing is a mess of souvenir shops and fast-food restaurants – and time is running out to change things

It was the most famous border crossing in the Berlin Wall, the official gateway for allied diplomats, military personnel and foreigners to enter communist East Berlin by road.

And in 1961, Checkpoint Charlie seized the world’s attention when a diplomatic spat about allied forces’ freedom to travel in East Berlin quickly escalated and saw Soviet and American tanks squaring up to one another. The world watched aghast, fearful of a third world war, as a formidable flock of superpower tanks rolled towards the border, standing just 100 yards apart.

Three decades after the wall’s fall, however, the large crowds of visitors arriving at this nub of cold war history are mostly bewildered by what they find. Lined with tourist shops and fast-food joints, Checkpoint Charlie is a place where it is easier to buy a furry Soviet hat or a “You are leaving the American sector” hip flask than to get a flavour of its dramatic history.

But the future of this historically charged spot is now under hot dispute, with clashing visions of how to deal with it – and time is running out to make a decision.

Berlin’s politicians are fine-tuning a redevelopment plan, unveiled in June, for a 3.2-acre site that includes a cold war museum, apartments and commercial areas, as well as a pentagonal open space.

We do need cheap housing. This is legitimate and understandable, but completely out of place here

Following the plan’s launch, it met with a volley of complaints, most vocally from the former Berlin culture secretary Tim Renner, a music producer and author who came up with his own ideas for the site, alongside others from Berlin’s artist, techno and graffiti scenes. German newspapers homed in on his provocative suggestion to pedestrianise Friedrichstrasse around Checkpoint Charlie and block it with two disused tanks, harking back to the 1961 crisis.

Given its pull for curious international visitors, Renner pushed for more open space to host artist installations and debate. “We should not confine this history to a museum, but make as much as possible visible on the site,” he said, adding that he rejected the official plan for new apartments, a big political priority given Berlin’s housing shortage.

“We do need cheap housing,” he said. “This is legitimate and understandable, but completely out of place here. Who wants to live directly where 12,500 tourists pass by every day?”

But decision-makers know the clock is against them and their bid to revamp the checkpoint. If the Berlin’s state parliament doesn’t manage to approve a new deal before a legal deadline in February 2020, plans for the redevelopment and cold war museum could potentially be shelved for good.

After that date, an official development freeze on the eastern part of the area ends, meaning the idea of creating an open public space won’t be legally safeguarded. The plot’s prime real estate could be completely built up, meaning even less space – and more confusion – for the hordes of international visitors. 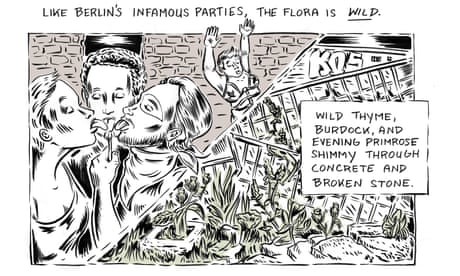 More space for rising numbers of visitors is clearly needed. The junction, which the Die Welt newspaper mocked as “Berlin’s toughest no-go area”, is filled with hop-on, hop-off tourist buses, Segways, e-scooters competing with Berlin’s usual impatient inner city traffic and pedestrians from around the world. Every so often, cars hoot loudly to open a path through crowds waiting to be photographed next to the sandbags and replica checkpoint cabin that stand in the middle of the road.

“It’s narrow and cramped and just doesn’t work for so many people,” said Nick Imrie, a teacher from Brighton who was visiting the former border crossing with a group of 15- and 16-year-olds. “It all feels a bit bland. There are more interesting state museums, like Bernauer Strasse, which students really respond to” – a reference to the street where a stretch of 70 metres of the original Berlin Wall still stands, alongside the so-called death strip and a watch tower.

“The situation is pressing,” says Klausmeier. “There must be a permanent exhibition – beyond the temporary information boards and tourist traps – to explain the place and put its historical dimensions in context. Worldwide there are few more suitable places for a cold war museum than Checkpoint Charlie.”

At the site, tourists take photos of the reproduction of the “You are now leaving the American sector” sign, and until recently would queue to be photographed alongside pseudo soldiers in historical guard uniforms. History is often eclipsed by what a former Berlin culture senator dubbed as “polit-kitsch junk”.

Less immediately obvious to visitors are sites such as the basalt cylinder that marks the spot where Peter Fechter, an 18-year-old bricklayer, was shot by East German border guards as he tried to escape to the west in 1962. He bled to death in the death strip as guards from both sides looked on, in full view of western media – and became a worldwide symbol of the wall’s inhumanity.

Named by the allied powers in divided Berlin, Checkpoint Charlie is the most internationally famous of the East-West crossings in the Berlin Wall (there were others called Bravo and Alpha). It was used by foreigners and members of the allied forces allied diplomats, military personnel and foreign tourists, which also made it less significant for Berliners, perhaps explaining the sluggish political progress in its planning and design after the wall fell.

Hope M Harrison, associate history professor at George Washington University and author of the book After the Berlin Wall, recalled how the founder of a privately run museum – the more than 50-year-old Mauermuseum: Haus am Checkpoint Charlie – erected crosses in 2004 to remember those who died because of the wall.

“First there were 1,065 crosses and then there were 1,075,” she said. “They didn’t say where they got the numbers from. That was when the [Berlin] senate decided that there needed to be a more professional approach: a private person shouldn’t be in charge of the memory of the wall in such a public place.”

Shortly afterwards, the senate earmarked the Checkpoint Charlie site to host a cold war museum, but the plan floundered and more than a decade has passed, with only a small makeshift information pavilion, the Black Box, to explain the site’s cold war significance. In the meantime, souvenir shops have proliferated, as have private museums.

But more needs to be done, and soon, argues the former Berlin senate official Rainer Klemke, who is 71 and has spent half his working life pushing for the construction of a cold war museum. “There is clearly an information gap,” he said. “Checkpoint Charlie is the international site of the cold war, it’s not a place for navel-gazing – we finally need an international multi-perspective take on the cold war here.” 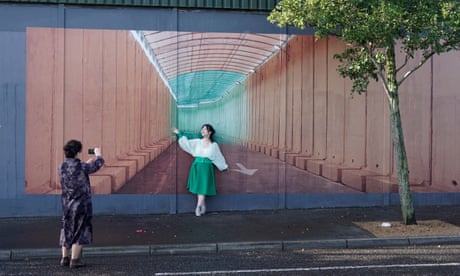 Symbols of failure: the deeper issue that connects border walls

In the meantime, Berliners still give the chaotic, tourist-filled junction a wide berth, with media reports dismissing it as a “tourist circus” or a “Disneyland”. But those who passed through the crossing during its 28 years as an active checkpoint retain vivid memories of power play and hostility.

“The guards were intimidating and small-minded,” said one American West Berliner who, as a young artist, was sent home to change into more appropriate clothes because the East’s guards took offence at her ripped jeans.

Liane Gersch, an American teacher who moved to West Berlin in 1975, said that while she went through the Checkpoint Charlie numerous times she only made the trip once with her car, which was “torn apart” by the East German guards. They unwrapped all the tools that were in the back, taking away the outdated pages of West German newspapers.

“But I was one of the lucky ones,” she said. “At least I could cross.”