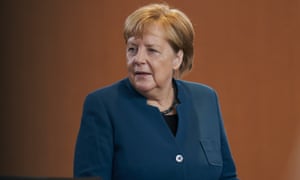 Regional politician gives warning, after calls for barriers on far-right outfit to be lifted

Angela Merkel’s Christian Democratic Union risks “tearing itself apart” over her legacy in the wake of a string of poor election results, as some conservative politicians double down on her pro-immigration stance while others eye a pact with the nationalist far-right.

In the eastern state of Thuringia, where the CDU was beaten into third place by the openly xenophobic Alternative für Deutschland (AfD) at state elections last month, 17 politicians from the party have written a letter calling for lifting the cordon sanitaire around the far-right outfit.

The letter, which does not mention the AfD by name, demands a readiness for coalition talks with “all democratically elected parties” – a breach of the CDU’s official party line.

The proposal has been met with vocal condemnation within the CDU’s national leadership. In an op-ed for Der Spiegel published on Wednesday morning, party secretary Paul Ziemiak called the Thuringian leader of the AfD, Björn Höcke, “a Nazi”, arguing that a governing alliance would amount to “a betrayal of our Christian Democratic values”.

If the CDU’s Thuringian branch were to cooperate with the AfD, regional politician Werner Henning told Die Welt, it would “tear apart“ the party.

Josef Schuster, president of the Central Council of Jews in Germany, said the letter-writers would “help to make the AfD more socially acceptable.” Already once in German history, Schuster warned, civil politicians had acted as “stirrup holders” for a party run by the far-right.

The wrangle over principles and power in the eastern state is part of a wider free-for-all in the party that has governed Germany for 17 out of 24 postwar terms, facilitated by Merkel’s relative absence from the hubbub of domestic politics and her designated successor’s struggle to build a profile.

CDU leader Annegret Kramp-Karrenbauer was once seen as Merkel’s successor-in-waiting but has struggled to make her mark, even after taking over the defence ministry in July, not least because her mentor’s support for her policy initiatives has remained lukewarm at best.

Friedrich Merz, a conservative of the old guard and darling of the all-powerful Springer media empire, used the poor election results to launch an open attack on Merkel, saying the result was a “vote of mistrust” in her coalition government with the centre left.

“We are in a really difficult situation”, said Merz, who came second in the race for the party chair last December. “In my view that has mainly got to do with the chancellor’s inaction and lack of leadership, which has descended on this country like a veil of fog.”

The row has seen some of the chancellor’s old allies reach to stab her in the back, while some of her fiercest critics have changed tack to fall in line with her centrist interpretation of the CDU’s role.

As German health minister, I’m championing both migration and patriotism

Health minister Jens Spahn used to be a vocal opponent of Merkel’s stance during the refugee crisis, describing her migration policies as recently as last autumn as “the elephant in the room” that was putting off formerly loyal voters.

In an article for the Guardian, however, the openly gay politician appears to pitch his tent closer to Merkel’s camp rather than that of her detractors. While continuing the warn of the dangers of “uncontrolled immigration”, the former hardliner now strains for a positive message. “Germany is ageing rapidly,” Spahn writes. “Our message to the people of Mexico, the Philippines and all other nations is: if you share our values and want to work with us, please feel cordially invited!”

By contrast, some Merkel loyalists have broken out in open protest against a perceived leadership vacuum at the top. Norbert Röttgen, the chairman of the German Parliament’s foreign relations committee and once seen as one of her allies, told the New York Times: “Germany is now a complete void in everything. I can’t see a European policy, the foreign minister is a void, the chancellor knows everything but does nothing.”

At the CDU’s party conference in Leipzig on 22 November, the row threatens to escalate further, with no ceasefire in sight. “The possibility cannot be excluded”, wrote Süddeutsche Zeitung, “that Merkel’s parting from power could also result in the CDU’s parting from the chancellory”.

Sorgente: Merkel’s CDU could ‘tear itself apart’ after call for AfD coalition | World news | The Guardian