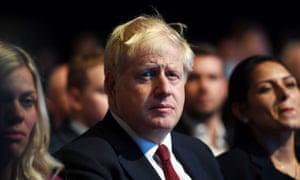 Rolling coverage of the day’s political developments as they happen, including reaction to a leak of UK plans for the Irish border, Boris Johnson’s interview round and Priti Patel’s speech to the Conservative party conference

Mary Lou McDonald, the Sinn Fein president, told the BBC this morning that the plans for customs sites away from the border – leaked to RTE but subsequently dismissed by Boris Johnson as not reflecting the government’s current thinking – would amount to a return of a hard border. She said a plan like this would be unacceptable to Sinn Fein. She explained:

What has been described in this document is essentially a hard border on the island of Ireland. Anything that causes there to be customs, tariffs, checks anywhere represents a hardening of the border …

Boris Johnson voted for the backstop because in a moment of perhaps rare lucidity he recognised that was the bottom line to protect the island of Ireland. I only hope he returns to that position.

Here are the main points from Boris Johnson’s three broadcast interviews this morning.

Mr Johnson’s allies say they expect Britain to submit to Brussels its formal proposals for a Brexit deal — in legal text — after the prime minister closes the Conservative party conference in Manchester.

In his speech to party activists, the prime minister is expected to declare the controversial “Irish backstop” dead, challenging the EU to accept the new British proposal or face the prospect of a disorderly no-deal Brexit.

“By the end of the week everyone will know whether a deal is possible,” said one ally. One cabinet minister said: “If the EU starts to leak and brief against us, that would be a very bad sign.”

Asked about this story, Johnson did not reject its premise. He replied:

What we will be doing is giving our friends a proposal, we think it’s a good proposal. Clearly, if there is no way of getting it over the line from their point of view, we will have to live with that.

We haven’t. In truth, we have not made any such request.

But Johnson did not rule out making such a request in future.

I think there’s a very good reason, and that is that I’ve been tasked one way or the other to get Brexit done by October 31. And there are quite a lot of well-meaning and highly intelligent people who basically think that that would be something they don’t want to see, and I think that there is a concerted effort now to frustrate Brexit.

At another point he said:

You asked me about why is all this shot and shell raining down on the government – I think it is because we’re going to get on and deliver Brexit by October 31.

I am so sorry, I have never heard of her.

When the LBC presenter Nick Ferrari expressed astonishment at this, Johnson went on:

You’re going to have to forgive me. I should know about Naga Munchetty.

I think there is a legitimate question to be asked about the generation of this SO24 legislation.It is a very interesting situation. We have bills and an act – the so-called Surrender Act – that I’m afraid has a massive consequence for the people and economy of this country were it to be effected.

We have no knowledge of how it was produced. It is not subject to normal parliamentary scrutiny. No-one knows by whose advice or legal advice it was drawn up.

I say to all those who wish to see a return of the old generous-hearted, loving mayor of London and all the rest of it, that person has not gone away. I am a one-nation Tory.

But we are in a position where the only way we can take this country forward and unite our country again is to get Brexit done. That’s what we need to do.

From the Times’s Matt Chorley

Here is Boris Johnson on the set of Today.

Q: Do you regret any of the language you have used?

Johnson says he has to recognise that people can take offence.

Q: Has your partner, Carrie Symonds, suggested you tone it down a bit?

He says he persists in thinking the surrender act is an appropriate term for the Benn Act. It gives the EU the power to decide how long the UK would stay in the EU.

I will post a summary of the key points from all these interviews shortly.

Johnson is now back to buses, saying they can make a huge difference to people’s lives.

He wants people to be able to use contactless payments on buses across the UK.

Ferrari quotes some comments from David Cameron’s book about Johnson: “paranoid … massive irritation … full of jealousies that influenced his behaviour.”

Johnson says he has had his up and downs in his relationship with Cameron. He says he has not read Cameron’s book.

Q: Did you tell David Cameron that Brexit would be crushed like a toad?

Q: What was your relationship with Jennifer Arcuri?

Johnson claims this story is being pushed by the current mayor of London, Sadiq Khan. He says Khan has let knife crime out of control.

Q: Did you behave improperly with Charlotte Edwardes?

Q: Matt Hancock says he believes Edwardes. What do you say about that?

Johnson says he is saying what he has to say.

Q: Why are these stories coming out?

Johnson says some intelligent people want to block Brexit. There is a “concerted effort” to stop it happening, he says.

Q: Are you saying these allegations are politically motivated?

Johnson says he is getting a lot of “shot and shell” because he is trying to deliver Brexit.

And it may be an attempt to distract from his domestic agenda, he says.

Q: Your sister says you are backed by currency speculators who will benefit from a no-deal Brexit.

Johnson says that claim is wrong. But he does not want to say more about his sister.

Boris Johnson says he has not heard of Naga Munchetty

Johnson says he does not know how Naga Munchetty is, or what the story about her being reprimanded by the BBC was all about.