‘Every day, it is a risk’: immigrant communities paralyzed by fear of impending Ice raids | US news | The Guardian 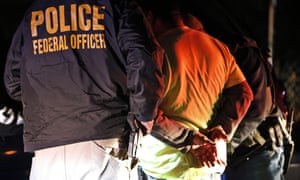 When CG heard that Donald Trump had announced raids by the immigration enforcement agency Ice a few weeks ago, she turned to her husband. Get groceries, she told him, like a storm is coming.

“Bananas, milk and bread,” CG lists off, remembering what she told him, “Because who knows when we’ll leave the house.”

Those raids were later postponed in June. But now they are back and scheduled to begin Sunday and CG, who is undocumented and asked to be identified by her initials out of a fear of the authorities, is afraid again.

Federal officials have said the operation will target undocumented families who have been issued final removal orders. On Thursday, media reports listed ten cities across the United States where the raids would take place, affecting more than 2,000 immigrants. They include New York, Los Angeles, San Francisco, Chicago and other major cities across the country. CG’s hometown of Atlanta is also on the list.

Atlanta’s mayor Keisha Lance Bottoms, who has been a vocal opponent of Ice raids told the Guardian: “The White House is compounding an already spiraling humanitarian crisis with detention centers. If they want to truly help cities, they should ask us what we need, because political shows of force will only harm – not help.” 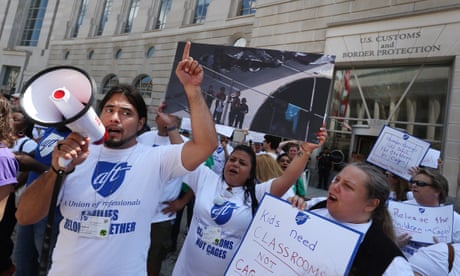 Bottoms has closed city detention centers to Ice agents, she mentioned in a Friday interview on CNN, “because we don’t want to be complicit in family separation”.

An Ice spokeswoman in Atlanta did not respond to specific questions because, as the agency has said, it “will not offer specific details related to enforcement operations”.

Still, CG, who came to Georgia from Mexico 12 years ago and has had a green card application in process for years, is bracing for the worst.

She hasn’t been driving much out of fear of being stopped.She will refuse to leave her house on Sunday morning, and then will decide day by day if she can leave the safety of her home to clean homes to pay the bills again.

Since the start of the Trump presidency, she has educated herself on her rights through immigrants’ rights groups who have made increased efforts to reach immigrant communities.

For example, Project South, an Atlanta advocacy group plans to deliver information to South Asian shop owners about their rights if Ice agents show up at their business. The Georgia Latino Alliance for Human Rights has also canvassed immigrant-heavy neighborhoods telling residents that if federal agents want to enter her home, they must have an arrest or a search warrant from a judge.

The picture is the same elsewhere. Campaigns across the US have spread through major cities as news of raids spread through immigrant communities, said Adelina Nicholls, the executive director for GLAHR.

“We’ve reached more than 4,600 people since we started our campaign after Trump was elected,” Nicholls recounts. In addition to the campaign, they plan to document the raids in real time on Facebook Live.

“We can’t stop them but we can make noise,” she says.

If the aim of the raids is to create widespread fear among immigrant communities, then many activists see them as already working. Charles Kuck, a veteran immigration lawyer, said he has received calls from dozens of clients with work visas and green cards whom he says have nothing to fear.

“The number [ICE] will be getting is very small but the impact will be broad,” said Kuck. “We will see a real impact when people don’t go to work [and] don’t go to church this weekend.”

After the announcement of last month’s raid, Kuck heard from employees at local chicken processing plants that more than half of the employees didn’t show up to work for a week.

Veronica, who is undocumented and wants to be identified by her first name only, made the trip from Mexico to the United States 20 years ago

“I feel like I’m in another country,” she said of the atmosphere in recent months. “Every day, it is a risk,” she added, of being on the street, driving your own car or even going to a shopping center.

“In white neighborhoods, you have signs that say ‘neighborhood watch’. We have to have our own network now.” Veronica points to her phone. “A friend sent me a text message this morning to tell me the police are in the neighborhood. I wasn’t there but I passed it on to my network.”

This Sunday, as she hunkers down with her family, her network will be busy passing on information if they see the white Ice vans patrolling their streets, too, she says.

“It doesn’t make sense. They’re not trying to arrest terrorists or criminals, just undocumented people,” she said. “We just want to pay the bills.”

Sorgente: ‘Every day, it is a risk’: immigrant communities paralyzed by fear of impending Ice raids | US news | The Guardian