Labour voters want to come home, but the party must prove it will resist Brexit | Gaby Hinsliff | Opinion | The Guardian 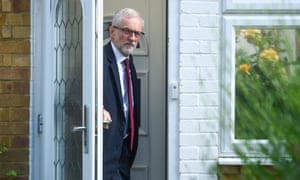 While Corbyn trots out the same line and tries to give the impression something radical has shifted, patience is running out,

Nothing has changed, to coin a phrase.

Once again Labour has lost an election, and once again we’ve spent the weekend trapped in the same old Groundhog Day routine. Jeremy Corbyntrots out the same Brexit line, but with more emphasis on a second referendum and less on all the caveats to make it look as if something radical has changed; simultaneously, others talk down the idea that it has.

On Tuesday morning Diane Abbott did her level best to suggest preferences were shifting, but she couldn’t even confirm to Radio 4’s Today programme that the Labour party would officially back remain should a second referendum happen. No, that would be for party conference to decide, which could mean continuing in limbo until the month before Britain is due to leave the EU. It seems scarcely conceivable that Labour wouldn’t back remain, when by autumn the choice could be that or no deal, but years of evasive doublespeak should have taught us to take nothing for granted until Corbyn personally spells it out in words from which neither he nor his aides can wriggle away. Even then, it’s unclear that the Labour leader would campaign enthusiastically to stay in the EU, given his grudging and obstructive contribution last time.

But the broader problem is that Labour may finally come around to the idea of a second referendum just as the prospect is slipping out of sight. It’s never been the easy panacea some remainers suggest – Abbott was right to point out the risk that leave could simply win again – and it hasn’t commanded a majority in parliament. But under Theresa May, there was at least a possible route to one. The prime minister was clear that in return for supporting her withdrawal agreement, MPs could amend her bill to seek a confirmatory vote on it.

If the new Tory leader is a hard Brexiteer in no mood for compromise, however, there may not be any withdrawal agreement to put to the people and there is no guarantee the opposition will even be able to force a referendum on whatever’s left. The worst case scenario is that we could be heading for a showdown in parliament between no deal and revoking Brexitoutright. Once again it seems inconceivable that Labour wouldn’t back revoke, but the danger is that the party keeps getting caught fighting the last war whenever a new one breaks out.

And all the time, patience is slowly running out. Many natural Labour voters who voted Lib Dem, Green, SNP or Plaid Cymru out of sheer frustration last week only meant to stray temporarily. They still want to come back, just as soon as Labour shows it’s learned the lesson, and they don’t want to risk voting for the smaller parties in a general election where fear of letting the Tories back in weighs much more heavily.

But the longer this mess drags on and the more their temporarily adopted parties do to make Labour refugees feel welcome, the greater the risk that these voters won’t come home after all. We may be heading for an uncertain future where neither big party can command a majority, power belongs to whoever can most easily assemble a loose parliamentary coalition of the willing, and the only viable partners for Labour are all likely to demand a commitment to remain as their price. There is no sign that a Labour leadership already struggling to catch up with the present is thinking seriously about what could be coming next. And as May discovered, sooner or later those who cannot change find the world moves on without them.

• Gaby Hinsliff is a Guardian columnist

Sorgente: Labour voters want to come home, but the party must prove it will resist Brexit | Gaby Hinsliff | Opinion | The Guardian