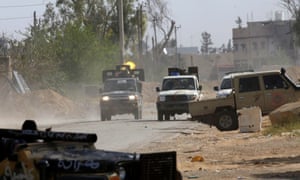 It is unclear whether aircraft or drones carried out the strike, which follows US statement in support of Haftar

Several airstrikes, including the first alleged use of armed drones in the conflict, shook Tripoli overnight in an escalation of the United Arab Emirate-backed assault on the Libyan capital led by Khalifa Haftar. The allegations about the use of drones were made by the Government of National Accord (GNA) based in Tripoli, and supported by eyewitnesses.

A Reuters reporter and several Tripoli residents said they saw an aircraft circling for more than 10 minutes over the capital late on Saturday, and that it made a humming sound before opening fire on several areas. Drone strikes make a noticeably different noise from missile strikes.

What does the battle for Tripoli mean for Libya and the region?

An aircraft was heard again after midnight, circling for more than 10 minutes before a heavy explosion shook the ground. The UAE established a drone facility at al-Khadim airbase south of Tripoli in 2016, and experts say the ageing fighter aircraft available to Haftar cannot fly by night, making it highly likely that drones were involved.

Haftar’s offensive is aimed at toppling the UN-recognised government in Tripoli and has the backing of Saudi Arabia and Egypt.

Peter Millett, the former UK ambassador to Libya, said: “The use of drones was a significant and tragic escalation that will increase the number of Libyan causalities.”

Anas El Gomati, director of the Sadeq Institute, a Libyan thinktank, said: “The air war in Tripoli has officially entered a dangerous new phase and has the become an attack by a foreign invading power; the UAE.

“Libya is still Libya, but it’s on the verge of becoming a Yemen on the Mediterranean. Haftar’s promise of enduring peace and stability is a myth. UAE drone strikes cannot deliver unity.”

The UN has estimated that 227 people have been killed and 1,128 injured in the two weeks of fighting. More than 16,000 people have been displaced from their homes. The GNA claims its resistance has pushed Haftar’s forces back south of Tripoli.

The main airstrikes apparently hit a military camp of forces loyal to the GNA in the Sabaa district in the south of the capital – the scene of the heaviest fighting between the rival forces.

Authorities temporarily closed Tripoli’s only functioning airport, cutting air links to a city of an estimated 2.5 million residents. The airport in Misrata, a city 130 miles to the east, remained open.

Both the UAE and Saudi Arabia have been involved in a four-year war in Yemen in a bid to oust a Houthi-led government in Aden. .

The airstrikes on Tripoli, first launched last week, appear to reflect the approval given to Haftar by Donald Trump in a phone call on Monday. The White House did not reveal that this call took place until Friday, four days later.

Libyan sources claimed the shift in the US position towards support for Haftar came after a discussion with John Bolton, the US national security adviser, and contacts with Mohammed bin Zayed Al Nahyan, Abu Dhabi’s crown prince.

The US appears to have accepted the view from its chief Middle Eastern allies that Haftar’s assault can be seen as the act of a strong leader fighting jihadist militias in Tripoli. But many independent Libyan experts claim Haftar has no commitment to democracy, and himself deploys Salafist militia in his self-styled Libyan National Army.

Trump’s personal backing for Haftar appears to have undercut both the UN special envoy, Ghassan Salamé and the UK Foreign Office’s efforts to secure a UN security council resolution calling for a ceasefire.

Both Russia and the US opposed British moves at the UN last week to pass a statement calling for a ceasefire and a return to talks. In a bid to win over Russian diplomats, the UK had already removed from its draft ceasefire resolution any implication that Haftar was the aggressor, or that his actions forfeited his right to rule Libya in the future.

The UK foreign secretary, Jeremy Hunt, spoke at the weekend to Mike Pompeo, the US secretary of state, after the White House revealed Trump’s backing for Haftar. The US Department of State merely said the two men reaffirmed their commitment “to continue diplomatic efforts to achieve a freeze on the ground and a return to the political process”.

In a bid to re-establish a collective western position, Italy’s foreign ministry has convened an inter-ministerial meeting next week on Libya. Italy, broadly supportive of the GNA, has also clashed with France, which is accused of backing Haftar and even deploying special forces.

Italy believes the airstrikes show that Haftar underestimated the degree of ground resistance he would face inside Tripoli. However, he has used siege tactics in the past in Libya to grind down resistance, and may do so again.