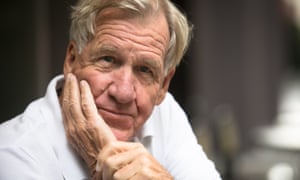 Investigative reporter broke the story of the El Mozote massacre in El Salvador, which Elliott Abrams is accused of whitewashing

Those on the left, particularly those opposed to Trump’s Venezuela policy, praised Omar’s performance. Alexandria Ocasio-Cortez tweeted that it “felt like justice” watching a Somali refugee question Elliott Abrams.

Others defended him as a dedicated public servant, with commentator Max Boot describing Omar’s questioning as a “botched interrogation” that “got just about everything wrong”.

One person watching the exchange with interest was Raymond Bonner, the former New York Times reporter who, along with Alma Guillermoprieto of the Washington Post, broke the story of the El Mozote massacre.

The El Mozote massacre was one of several atrocities that occurred at the hands of the El Salvadoran government in 1981 in the eastern province of Morazán, which led to the deaths of roughly 800 people, including children just days old, many after being tortured and raped.

The administration, including Abrams who was assistant secretary of state for human rights, quickly dismissed the reports. Abrams claimed Bonner’s reporting was communist propaganda and insisted “the administration’s record in El Salvador is one of fabulous achievement.”

Bonner now lives half a world away from El Salvador and Washington – in Sydney, Australia, where he owns and runs a bookshop.

In January, Trump announced that Abrams would take the role of special representative to Venezuela, a country suffering from food shortages and hyper-inflation. The US has condemned Venezuelan president Nicolás Maduro as a tyrant and recognised the opposition leader Juan Guaidó as the country’s president. Trump has issued stark warnings to the Venezuelan military if it continues to stand with Maduro’s government.

Bonner has concerns about Abrams’ appointment.

“I would think, given his track record, given his history, is this the person who should be appointed to a very sensitive foreign policy position?” he says. 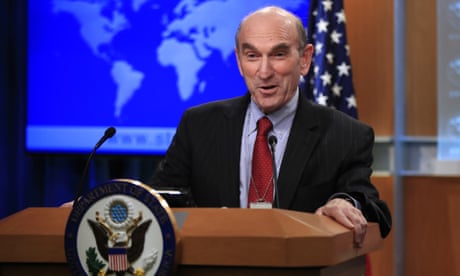 US diplomat convicted over Iran-Contra appointed special envoy for Venezuela

Bonner is sceptical that Trump himself had much to do with Abrams’ appointment, thinking it likely that the president rubber-stamped a nomination rather than him requesting Abrams personally. He is also wary of any claims that Trump has a carefully plotted out foreign policy (“I think it’s an oxymoron: foreign policy under Trump. I really am not kidding”), but he does think Abrams is a representative who will serve the president well.

“He will do Trump’s bidding,” he says. “El Salvador demonstrates that he will do whatever is necessary to carry out the president’s objective. In El Salvador, it was to prop up what a diplomat called … a genocidal, nun-killing junta, and in Venezuela it’s to get rid of the government. And just like he lied when necessary, or quote-unquote misled Congress and the public when necessary, he’ll do the same in Venezuela. So he’s the right man for the job if you’re Trump. He’s the right man, if that’s what you want.”

Bonner says he was pleased Omar went after Abrams’ record, although was less impressed by her performance at the hearing, saying her questioning was “terrible”.

“Somebody ought to be asking why Elliott Abrams is put in a position of influence. She was right to question his ethical qualifications for this job … I suppose one of the questions is how does a guy like this hold on?”