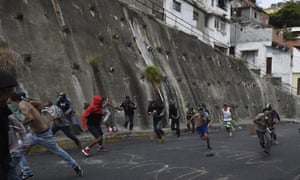 A foiled military uprising, violent protests across the capital and planned nationwide marches led by an emboldened opposition; Venezuela’s embattled president Nicolás Maduro has survived threats to his power before, but this week is could be the most difficult yet.

Maduro, who last August survived an audacious drone assassination attempt, presides over a crippling economic and social crisis, and justifiably sees threats from all sides. 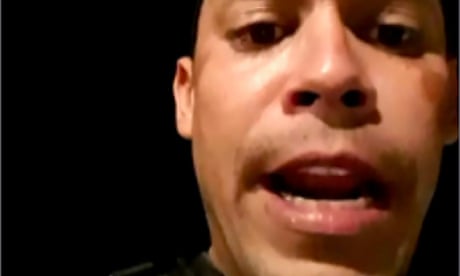 Early on Monday, 27 national guardsman were arrested after allegedly attempting to mount an uprising, in a sign that he may be losing the backing of the military – long regarded as the power broker in Venezuela.

“This situation is unbearable,” Eduardo Solano, a young computer scientist who took to the streets in his Diego Lozada neighbourhood, said. “It doesn’t matter if you earn bolivars or dollars, it’s not enough.”

Solano and his fellow protesters dispersed around midnight, when armed gangs loyal to the government – known as colectivos – arrived and fired shots in the air, he said.

By Tuesday morning, the neighbourhood was strewn with rubble, and roads were scorched with burn marks. Though officials made no statement on the protests, local watchdogs reported that the national guard had deployed tanks to quell a disturbance in El Valle, another neighbourhood. 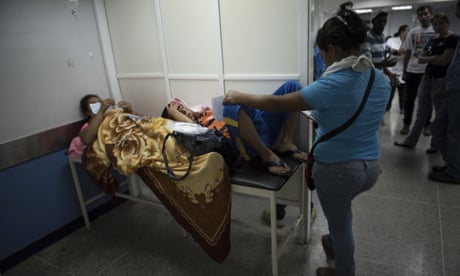 The foiled uprising and street violence came ahead of nationwide opposition marches against Maduro planned for Wednesday.

Oil-rich Venezuela is mired in economic and political turmoil, with hyperinflation rendering the bolivar currency practically worthless. Shortages in food staples and basic medicines are rampant, while crime is widespread. More than 3 million Venezuelans have fled, causing consternation across the continent.

Maduro, who assumed power when his mentor Hugo Chávez died in 2013, has long resisted calls to stand down. He sidelined the opposition-led national assembly in 2017, replacing it with a pliant constituent assembly via elections labelled fraudulent. When mass street protests broke out that year, he sent in the national guard, killing at least 120 and injuring hundreds.

Though years in the making, the crisis has accelerated since Maduro – who won re-election last May in a widely criticised vote – began his new term on 11 January, rallying the once-fractured opposition against him.

Juan Guaidó, the leader of the opposition-held national assembly, declared himself ready to assume the presidency until open elections could be held.

Guaidó expressed support for those protesting. “We are all here in the same boat: without electricity, without water, without medicines, without gas and with an uncertain future,” he tweeted. “We are all submerged in this crisis, except the usurper,” he added, in reference to Maduro.

The smaller protests that swept through western Caracas on Monday night are likely to give Maduro a particular headache as they broke out in poor neighbourhoods once loyal to his regime.

“I have never agreed with this government but I could put up with it. Now it is impossible,” said Solano, who said that many protesters were former Chávez supporters. “Now they were shouting they want Nicolás [Maduro] to leave.” 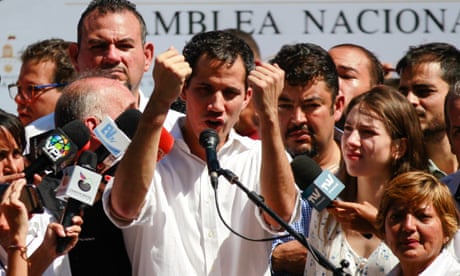 Who is Juan Guaidó, the opposition leader challenging Maduro’s rule?

This week’s developments have surprised analysts, who had thought the opposition to be too fractured – and Venezuela too divided on class lines – to bring about change.

“These protests are remarkable. The fact that people are coming out to protest across class lines reveals one thing: just how widespread the level of utter disgust with Maduro is in Venezuela today,” said Geoff Ramsey, the assistant director for Venezuela at the Washington Office on Latin America.

“If any kind of democratic solution to the crisis is possible, the opposition will have to make a case for themselves among the base of the ruling party, offering them concrete proposals that reflect their interests.”