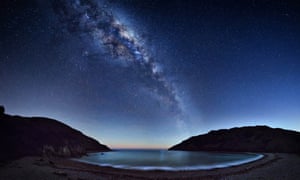 Astronomers attempting to capture the first images of the black hole at the heart of the Milky Way have given early hints that the ambitious project has been successful.

The observations, by the Event Horizon Telescope, are expected to be unveiled in March in one of the most eagerly awaited scientific announcements of 2019. Now, a senior scientist on the project has said “spectacular” data was gathered during observations of two black holes, including Sagittarius A* at the centre of our own galaxy.

“We managed to get very high-quality data at the very high resolutions necessary to observe the [black hole’s] shadow, if it’s really there,” said Sera Markoff, a professor of theoretical astrophysics and astroparticle physics at the University of Amsterdam, who co-leads the EHT’s Multiwavelength Working Group.

The team is in the final phase of reviewing data that was gathered in 2017 and Markoff could not confirm yet whether the observations had produced the first direct image of a black hole’s silhouette.

Prof Peter Galison, who is based at the department of the history of science at Harvard University and is also involved in the project, said that, if successful, the EHT’s first image would become one of the most significant in the past 50 years of astronomy. “If we get an image out of it, it will become one of the iconic images of science,” he said. “It’s an extraordinarily ambitious project.”

There is little doubt about the existence of black holes: the phenomenally dense objects distort the fabric of space-time in their vicinity, causing objects and light to appear to swerve off course. More recently, the gravitational wave observatory Ligo has detected ripples sent out across space-time when pairs of black holes collide.

Until now, though, a black hole has never been directly observed. The main barrier is that black holes are so compact that a telescope roughly the size of Earth would be required to see even the nearest one.

The EHT gets around this by linking together 15-20 telescopes spanning the South Pole, Europe, South America, Africa, North America and Australia. Collectively, the array has a resolution equivalent to being able to see a drawing pin in New York from London.

The EHT uses a technique known as interferometry, in which astronomers at observatories on different continents simultaneously observe the same object, then combine the collected data on a supercomputer.

This requires all the telescopes in the array to swivel towards the target black hole and measure every radio wave coming from its direction. Coordinating this was a “huge accomplishment of diplomacy and organisation”, according to Galison.

The EHT has two primary targets: Sagittarius A*, at the centre of the Milky Way, and a supermassive black hole called M87 in the Virgo cluster of galaxies. M87 is about 50m-60m light years away, but at more than six billion solar masses (1,000 times larger than our local black hole), astronomers hope it should be visible.

No one is sure what the image will look like but theoretical predictions show a black silhouette, set against a surrounding glow of radiation, something like the depiction in the film Interstellar. “You’d imagine seeing a black shadow or depression,” said Markoff.

Besides telling us what black holes look like, the EHT could also reveal whether they have properties predicted by Einstein’s theory of general relativity and give insights into exotic processes that occur in the extreme environment close to the event horizon.

Detailed observations will also be made of dramatic jets of material that are thrown out from some black holes, including M87. It is not clear whether Sagittarius A*, a relatively small black hole, has jets – it is possible that they are too feeble to have been spotted previously – and the EHT could resolve this question.

“We see these enormous jets of plasma moving almost at the speed of light,” said Markoff. “They can be hundreds of millions of times the size of the black hole itself – bigger than the galaxy.”

Black hole jets are believed to play a major role in cosmology, contributing to the formation of the cosmic web, in which galaxies are strung in clusters across the universe.

Sorgente: Scientists close to first sighting of black hole in the Milky Way | Science | The Guardian