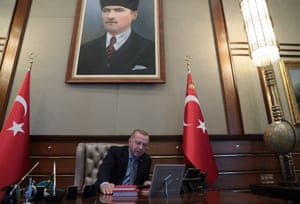 Trump on Kurds: ‘They didn’t help us in Normandy’

The Turkish military confirmed on Wednesday it had “launched the land operation into the east of the Euphrates river” and later said it had hit 181 “militant targets”.

Video footage showed civilians fleeing towns with columns of smoke rising in the background and jet trails visible in the sky.

Activists and observers said at least seven civilians had been killed so far. There were also early reports of civilian casualties in border towns hit by shelling. Pictures and video shared on social media showed wrecked buildings and bodies in the rubble.

Turkey’s offensive was triggered by a call between Donald Trump and Turkey’s president, Recep Tayyip Erdoğan, on Sunday, in which, the Turks claim, Trump handed over leadership of the campaign against Isis in Syria to Ankara. The American president announced on Sunday night that US troops would withdraw from the region.

Gülnur Aybet, one of the Turkish president’s senior advisers, told CNN: “President Trump and President Erdoğan have reached an understanding over precisely what this operation is.” Aybet added that Trump “knows what the scope of this operation is”.

Hours after the bombing began, Trump issued a statement mildly criticising the offensive aimed at Kurdish forces, which for nearly five years fought alongside the US against Isis.

“The United States does not endorse this attack and has made it clear to Turkey that this operation is a bad idea,” the statement said, before noting: “There are no American soldiers in the area.”

In remarks later, Trump presented the invasion as a historical inevitability, saying Turks and Kurds “have been fighting each other for centuries”. And he downplayed the US debt to Kurdish fighters, saying: “They didn’t help us in the second world war, they didn’t help us with Normandy … but they’re there to help us with their land.”

The UN security council is due to convene on Thursday to discuss the offensive at the request of its five current European members, but it is not expected to deliver a strong rebuke to Turkey, given tacit Russian support and US ambivalence.

The Nato secretary general, Jens Stoltenberg, called on Turkey to act with restraint and “ensure that the gains we have made in the fight against Isis are not jeopardised. I will discuss this issue with President Erdoğan Friday.”

The Turkish leader marked the launch of the offensive, dubbed Operation Peace Spring, with a tweet, saying that it was being conducted by Turkish and Turkish-backed Syrian militias, against Kurdish forces and Isis.

“Our mission is to prevent the creation of a terror corridor across our southern border, and to bring peace to the area,” he wrote.

Turkey says it is seeking to establish a 20-mile (32km) deep buffer zone along the border against the threat of what it says are Kurdish terror groups as well as Isis. It also hopes to resettle Syrian refugees in the zone.

The Syrian Observatory for Human Rights, a UK-based war monitor, said civilians in Ras al-Ayn and neighbouring villages had begun fleeing deeper inside the Kurdish-held region. Key administrative centres for the SDF were hit by airstrikes, a spokesman said.

In his statement on Wednesday, Trump said: “Turkey is now responsible for ensuring all Isis fighters being held captive remain in prison and that Isis does not reconstitute in any way, shape, or form.”

Trump later suggested the US had extricated some of the Isis detainees held by Kurdish forces ahead of the offensive.

“We are taking some of the most dangerous Isis fighters out … and we’re putting them in different locations where it’s secure,” the president said. Asked about what would happen to the captured European Isis fighters, Trump said: “Well, they’re going to be escaping to Europe. That’s where they want to go. They want to go back to their homes.”

He said he had given European governments repeated opportunities to take custody of their own nationals who had been caught in Isis ranks, but they had refused. European officials said they had been in talks with the US about arranging prosecutions of European Isis fighters in the region – most likely Iraq – on the grounds that European courts would release them on due process grounds.

But it is far from clear how Turkey would take custody of the 90,000 men, women and children with links to the terror group currently held by the Kurds.

The largest camp for women and children, al-Hawl, is home to 74,000 people, and lies outside the parameters of the proposed safe zone.

Hassan Hassan, an expert on Isis at the Centre for Global Policy, said the terror group was bound to benefit from Turkey’s incursion.

“The SDF had fresh and raw intelligence on people who joined Isis and the structures of Isis. Now Turkey comes in and doesn’t have access to much of this information,” Hassan, co-author of Isis: Inside the Army of Terror, said. He added: “The areas in Syria currently controlled by Turkey are full of corruption, more corrupt even than regime areas. Isis would have no trouble buying loyalty, paying bribes to escape. So definitely Isis will have new opportunities.”

Isis claimed an overnight suicide attack by two of its fighters in its former capital of Raqqa, which killed or injured 25 people.

The SDF, a US-backed force, is Turkey’s main target.

As Turkish forced massed to the north, forces belonging to the Syrian president, Bashar al-Assad, have also been on the move to the south of Syria’s Kurdish-held region, leaving the SDF pinched between the two.

While Trump has sent mixed signals over the Turkish invasion, politicians from both US parties vowed to inflict severe sanctions on Turkey.

“Turkey must pay a heavy price for attacking our Syrian Kurdish partners,” the Democratic senator Chris van Hollen said on Twitter. “Senators on both sides of the aisle won’t support abandoning the one regional group most responsible for putting Isis on its heels.”

Van Hollen and the Republican senator Lindsey Graham unveiled a sanctions package that would include measures targeted at Turkey’s political leadership, military transactions and US military support with Turkey, and the country’s energy sector.

Trump said he would support sanctions if Erdoğan did not carry out the invasion “in as humane a way as possible”. Asked what that meant, the president replied: “We’re going to have to define that as we go along.”

“I have serious concerns about the unilateral military action that Turkey has taken,” the UK’s foreign secretary, Dominic Raab, said. “This risks destabilising the region, exacerbating humanitarian suffering, and undermining the progress made against Daesh [Isis], which should be our collective focus.” 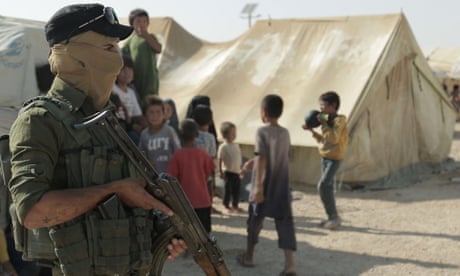 Women and children expected to ‘break out’ from al-Hawl camp

Downing Street said Boris Johnson had spoken to Trump about the offensive, noting only that: “The leaders expressed their serious concern at Turkey’s invasion of north-east Syria and the risk of a humanitarian catastrophe in the region.”

Aid groups have warned of a humanitarian catastrophe as thousands flee the expected fighting and re-emergence of Isis. The SDF says it has already withdrawn some soldiers from the prisons and camps holding Isis members to focus on the defence against Turkey, raising fears that Isis sleeper cells could liberate those inside.

Sorgente: TurkishTurkish troops advance into Syria as Trump washes his hands of the Kurds | World news | The Guardian