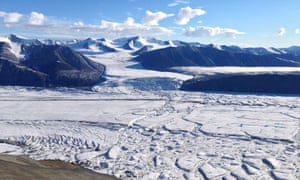 In the turbid, frigid waters roaring from the glaciers of Canada’s high Arctic, researchers have made a surprising discovery: for decades, the northern rivers secretly pulled carbon dioxide from the atmosphere at a rate faster than the Amazon rainforest.

The findings, published in the Proceedings of the National Academy of Sciences, flip the conventional understanding of rivers, which are largely viewed as sources of carbon emissions.

“It was a total surprise,” said Dr Kyra St Pierre, a biologist at the University of British Columbia and lead researcher on the project. “Given what we know about the rivers though … the findings are intuitive when you think about it. But we were initially very surprised to see what we did.”

The discovery came from time spent collecting meltwater samples on Ellesmere Island, in Canada’s Nunavut territory, where several glaciers flow into Lake Hazen. The team of researchers also gathered samples in the Rocky Mountains and Greenland.

“We have a pretty good understanding of the state of glaciers globally,” said St Pierre. “One thing we don’t know much about is the meltwaters and what happens when it … flows into rivers and downstream lakes.”

In temperate rivers, a bounty of organic material – plant life and fish – results in higher levels of decomposition, meaning the bodies of water emit a far greater amount of carbon dioxide into the atmosphere than they absorb.

But glacial rivers, with their milky appearance and silt-laden composition, are not very hospitable to aquatic life, leading to far less organic decay – and little carbon output.

At the same time, the fine sediment scraped from glaciers, including silicate and carbonate, when tossed along in the rushing waters, begins the geological process known as chemical weathering.

“As the rivers take up the particles, they start to mix within the water and within that water there are also gases, including carbon dioxide,” said St Pierre. “The mixing together creates these reactions and puts all these different particles together. That’s where we see that the net result is the sink of carbon dioxide.”

The research team discovered the effect of chemical weathering in removing carbon dioxide from the atmosphere extended as far away as 26 miles (42km) from the headwaters of the river.

This means that during high melt periods, glacial river water will absorb 40 times as much carbon as the Amazon rainforest.

“On a per-metre-squared basis, these rivers can consume a phenomenal amount of carbon dioxide,” said St Pierre. But their limited size means on a gross scale, they pull in far less than the sprawling Amazon. The team plan on sampling meltwaters in the Canadian Rockies, and expect to find similar results.

In a rapidly changing climate, the findings provide a surprisingly optimistic message: there are often unseen or underappreciated ways in which the planet regulates carbon emissions. “It shows just how little we know about these systems,” said St Pierre.

But the Vancouver-based biologist cautions that the short-term benefits of the newly discovered carbon sink also illustrate the rapid decline of glaciers in northern Canada.

“Glaciers are a finite resource. The waters that emanate from them are also a finite resource. And we’re potentially losing something that we’re deriving a lot of benefits from, before we actually fully understand it,” said St Pierre.

Previous research into glacial retreat found that the massive bodies of ice and rock were shrinking at a rate far faster than initially predicted by scientists.

In research published last year in the journal Nature Communications, biologists discovered the lake, one of largest of the high Arctic, was changing at a dramatic rate. Since 2007, water entering the lake from melting glaciers has increased tenfold over historic flow rates. With the water comes sedimentation, the same particles responsible for removing carbon dioxide. Because of the cloudier water in the lake, researchers speculate that the char population is growing skinnier, with the fish finding it more difficult to navigate the murky waters.

As warming in the Canadian Arctic accelerates at a rate faster than the rest of the planet, St Pierre hopes that it isn’t too late for the public to understand the stakes for the region.

“Within the context of climate change, we’re losing systems that are just spectacular for the people who actually get to see them,” said St Pierre. “And our hope is that people really see why this science is important.”