Brexit: Johnson sends unsigned letter asking for delay, and second arguing against it | Politics | The Guardian 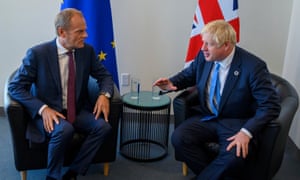 PM sends to Donald Tusk a photocopy of the request required by Benn Act, with a conflicting view in a second letter

Boris Johnson has sent an unsigned letter to European council president Donald Tusk requesting a further Brexit delay beyond 31 October – accompanied by a signed one arguing against it.

The prime minister sent a total of three letters: an unsigned photocopy of the request he was obliged to send under the Benn Act, an explanatory letter from the UK’s ambassador to the EU and a personal letter explaining why Downing Street did not want an extension. 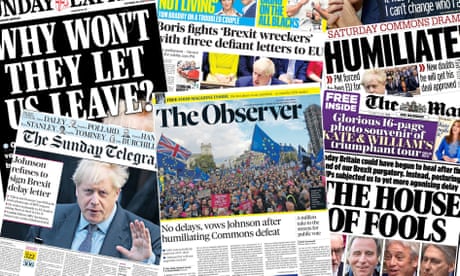 In the signed message, he warned of the “corrosive impact” of a long delay, and that “a further extension would damage the interests of the UK and our EU partners, and the relationship between us”. He said Parliament had “missed the opportunity to inject momentum into the ratification process” yet remained confident Brexit legislation would be passed by 31 October.

The move sparked concerns the prime minister could face fresh court action. One former Tory cabinet minister said: “This is clearly against the spirit of the Benn Act and is not consistent with the assurances that were given by Downing Street to the Scottish courts about applying for an extension. It will also put government law officers in a very uncomfortable position.”

The late-night letters followed another bruising day in the Commons for Johnson, where MPs voted by 322 to 306 to withhold approval of his EU exit deal, forcing him to write to Brussels by 11pm on Saturday to request an extension until 31 January 2020.

Despite the prime minister’s insistence that he would not “negotiate” a further extension of the UK’s membership of the EU, he confirmed on Saturday evening that he had sought such a prolongation. Shortly after 10pm London time, Tusk tweeted: “The extension request has just arrived. I will now start consulting EU leaders on how to react.”

After the extension request was sent, Jeremy Corbyn accused Johnson of “petulant posturing and bluster” and said “his damaging deal was defeated today.”

Officials in Brussels said there was little doubt that an extension request would be granted, despite the prime minister’s attempts to throw doubt on such a move. A decision on the terms could be taken later in October to allow for events to unfold in London. A summit could be held as late as 29 October. 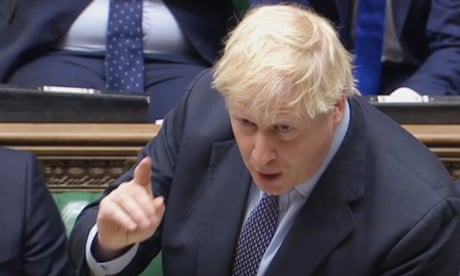 Ambassadors for the EU27 will meet on Sunday morning to discuss the latest developments.

Speaking in the Commons earlier, Johnson told MPs he did not believe the EU would be minded to offer a further extension and that he would not negotiate one.

But senior EU officials said it was clear during the discussions among the leaders at a summit on Thursday that they would grant an extension. “Even [the French president Emmanuel] Macron in the room didn’t suggest otherwise,” the source said.

The chair of the Bundestag’s foreign affairs committee, Norbert Röttgen, who is a senior member of German chancellor Angela Merkel’s Christian Democrats, said he had “no doubt” an extension would be granted.

A consequence of the delay to the Brexit deal being approved in parliament is that the European parliament’s plans to ratify the withdrawal agreement next week have also been left in doubt.

The European parliament will ratify the deal only after the Commons has approved it. MEPs next sit on 14 November, making 30 November a potential new Brexit day if the Commons approves the deal by then.

Guy Verhofstadt, the coordinator of the European parliament’s Brexit steering group, said his committee would “consider the outcome of today’s vote for the Letwin amendment on Monday”.

He added: “Whatever happens next, the marches outside the parliament show just how important a close EU-UK future relationship is.”

Jean-Claude Piris, a former head of the EU council legal service, told the Guardian that Brussels would not “wait and see” but that “if asked” the leaders would “say yes”.

The Commons voted on Saturday that it would not approve the Brexit deal until all related legislation was passed. MPs were concerned that the legislation would not be passed by 31 October, leaving open the possibility of the UK accidentally crashing out.

That decision triggered the Benn act which placed the prime minister under a legal obligation to request an extension unless a deal had been approved by 11pm UK time on Saturday. 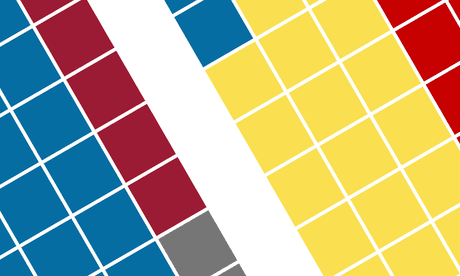 EU withdrawal deal: How did your MP vote on the Letwin amendment?

On Friday, Macron had tried to help Johnson cajole MPs into backing his deal by suggesting that he was opposed to a delay. “I am not trying to read into the future but I do not think we shall grant any further delay,” he had said.

A spokesman for the Élysée Palace said that any further delay “was not in anyone’s interest”.

She had told EU leaders that a Brexit extension would be unavoidable if British MPs vote down the new deal. Merkel said leaders had a responsibility not to push the UK out without a deal.