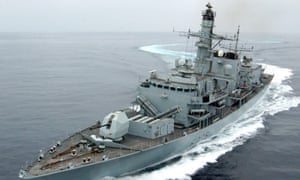 Three Iranian boats have “attempted to impede” a British oil tanker in the Gulf, further deepening tensions in the vital shipping channel off Iran.

The incident took place in the strait of Hormuz through which the commercial vessel, British Heritage, was attempting to pass on Wednesday.

It is the latest in a series of recent incidents in the area which have sent tensions between Iran and the US soaring. It also comes after the UK seizure of an Iranian oil tanker last week, for which Tehran has threatened retaliation.

“Contrary to international law, three Iranian vessels attempted to impede the passage of a commercial vessel, British Heritage, through the strait of Hormuz,” a Ministry of Defence statement released on Thursday morning said.

“We are concerned by this action and continue to urge the Iranian authorities to de-escalate the situation in the region.”

“Apparently the British tanker has passed. What [the British] have said themselves and the claims that have been made are for creating tension and these claims have no value,” Zarif said.

US defence officials, speaking on the condition of anonymity, had earlier told Reuters that the incident happened at the northern entrance of the strait of Hormuz.

“The Royal Navy HMS Montrose, which was also there, pointed it[s] guns at the boats and warned them over radio, at which point they dispersed,” one of the officials said.

“It was harassment and an attempt to interfere with the passage,” another official said. 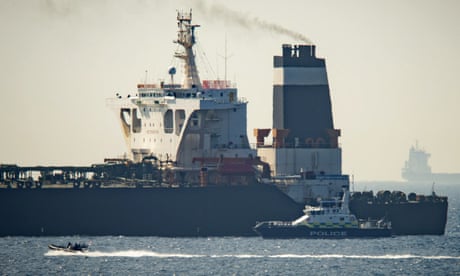 A spokesperson for US central command, Captain Bill Urban, said: “We are aware of the reports of Islamic Revolutionary Guard Corp Navy’s FAC/FIAC harassment and attempts to interfere with the passage of the UK-flagged merchant vessel British Heritage today near the strait of Hormuz.

CNN reported that a US surveillance aircraft recorded video of the incident. It said the HMS Montrose, which was escorting the oil tanker, trained its guns on the IRGC boats and issued a verbal warning. No shots were fired.

British Heritage was believed to be near the island of Abu Musa when it was approached by the Iranian boats. The island is in disputed territorial waters between Iran and the UAE, but the UK said the HMS Montrose remained in international waters throughout the episode.

On Wednesday Iranian president Hassan Rouhani warned the UK it would face unspecified consequences as a result of the UK’s seizure of an oil tanker bound for Syria off the coast of Gibraltar last week. The ship, believed to be in breach of EU sanctions on Syria, remains in British possession.

Rouhani was quoted by the Iranian official IRNA news agency calling the seizure of the Iranian oil ship “mean and wrong”. During a cabinet meeting he warned London: “You are an initiator of insecurity and you will understand its repercussions.”

Last week a former leader of the Revolutionary Guard said the Islamic Republic should consider seizing a British oil tanker in response.

Mohsen Rezaei, who led the Guard during Iran’s 1980s “tanker war” in the Gulf, made the comments the day after nearly 30 Royal Marines were deployed to impound the oil tanker Grace 1.

“If England does not release the Iranian oil tanker, the duty … [of Iran] is to respond and seize one English oil tanker,” Rezaei said on Friday.

Tehran has been accused of sabotaging oil tankers in the strait of Hormuz in an attempt at economic retaliation against the US after Donald Trump pulled out of a 2015 nuclear agreement and imposed sanctions on Iran.

The UK and other European countries have been trying to save the deal, in which Tehran agreed to limits on its nuclear programme in exchange for relief from crippling international sanctions.

Tehran’s recent decision to ramp up uranium enrichment together with the brinkmanship in the Gulf waters, however, makes it unlikely to survive.

The US is planning a multi-nation coalition force to monitor the Iranian presence in the crucial waterway and off the coast of Yemen, Pentagon officials said this week.

Marine General Joseph Dunford, the chairman of the US Joint Chiefs of Staff, said he discussed the matter on Tuesday with acting secretary of defence Mark Esper and secretary of state Mike Pompeo.

“We’re getting ready now to move out,” he told reporters at Fort Myer, Virginia.

“We have a pretty clear concept of what we want to do.”