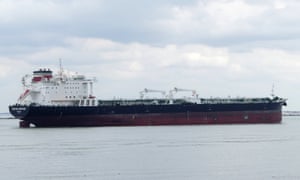 Iran has called on Britain to release its seized oil tanker and warned foreign powers to “leave the region because Iran and other regional countries are capable of securing the regional security”.

The Royal Marines seized the tanker last week on suspicion it was breaking European sanctions by taking oil to Syria.

Iran’s foreign ministry spokesman, Abbas Mousavi, told the IRNA news agency: “This is a dangerous game and has consequences … The legal pretexts for the capture are not valid … The release of the tanker is in all countries’ interests.”

Iran has said it will take reciprocal measures if its tanker is not released.

Is the US nudging Britain into dangerous waters with Iran?

Britain said on Thursday that three Iranian vessels tried to block the British-owned commercial vessel British Heritage from passing through the strait of Hormuz, which controls the flow of Middle East oil to the rest of the world, but backed off when confronted by a Royal Navy warship. Iran has denied the allegations.

Tensions between Iran and the west continue to rise, a week after Britain seized the tanker, with Mousavi accusing the UK of taking the action under US pressure.

“Such illegal measures could increase tensions in the Persian Gulf,” he told IRNA. The captain and chief officer of the ship were arrested in Gibraltar on Thursday, a week after the episode.

Shia-led Iran and its US-backed Sunni Gulf Arab rivals have been locked in proxy battles for dominance in the Middle East, from Syria to Yemen.

The UK is among the European supporters of the 2015 Iranian nuclear deal, from which Donald Trump withdrew the US last year, reimposing toughened sanctions on Tehran.

When imposing the sanctions in May, the US ordered other countries and companies to halt imports of Iranian oil or face being excluded from the global financial system.

In retaliation, Iran has decreased its commitments to the nuclear pact, in defiance of a warning by European countries.

The US blames Iran for a series of attacks on shipping in the world’s most important oil artery since mid-May, allegations which have been denied by Tehran.

The US has also dispatched extra troops to the region to counter what it described as Iranian threats.

Mousavi said on Friday: “Foreign powers should leave the region because Iran and other regional countries are capable of securing the regional security … Iran has repeatedly expressed its readiness to hold talks with its neighbours to resolve disputes.”

British ships operating in the Gulf have been put on the highest state of alert amid fears that UK-flagged commercial vessels are vulnerable to attack by Iranian gunboats.

The British government changed the alert to level three on Tuesday, the day before a Royal Navy warship trained its guns on Iranian gunboats that tried to disrupt the passage of an Isle of Man-flagged vessel. Level three is described as equivalent to the domestic security classification of critical in which there is an imminent risk of an incident.

The alert is for the 15-30 large British-owned vessels that travel through the Gulf every day.

Meanwhile Mohamed ElBaradei, the former director general of the International Atomic Energy Agency, asked the UK not to get involved in US plans for military convoys to protect oil ships in the Gulf.

Accusing the US of behaving like a “bull in a china shop” and taking the world down a dead-end street, the former inspector said the confrontational approach of the White House was not going to solve the threat posed to the Iran nuclear deal by the US decision to withdraw from it.

The UK claims it has not yet seen the details of the US proposal for coordinated international naval convoys through the Gulf. This is despite Trump having raised the proposal at the end of last month, before the G20 summit in Japan, emphasising that he wanted to see more Asian countries contributing to the cost of escorting oil ships.

On 28 June, after other attacks on merchant ships, Brian Hook, the US special representitve on Iran, travelled to London to meet the secretary general of the International Maritime Organization, Kitack Lim, to press the case for greater co-ordination. After the meeting Lim said his “primary concern is that merchant vessels, peaceably going about their business, should not be subjected to unprovoked attacks”.

More than 60% of the oil going through the Gulf is heading for Asian markets, and Trump has said he feels their financial contribution does not match the benefits they receive. The US dependence on oil, by contrast, has been falling.

The UK is increasingly caught in a vice, continuing to support the nuclear pact, while Iran slowly reduces its commitments under the deal in protest at Europe’s failure to do more to circumvent the impact of US sanctions on EU firms that want to trade with Iran.

Iran says the central agreement of the nuclear deal was that Tehran would permit close international oversight of its nuclear facilities in return for closer economic ties with the west.

The tensions between the UK and Iran over oil ships has added another dimension. The UK does not have sufficient naval assets in the region to protect all British-owned shipping, but it would be wary if the US were effectively in sole command of any such operation.

ElBaradei accused the US of “applying a waterboarding method to Iran, drowning Iran and then saying to them: ‘Let’s have a dialogue without pre-conditions’”.

He said he was horrified by the US policy on Iran. “The new crazies are going out of the way to look for confrontation. This is an opportunity for the British to say that they are standing behind values and principles and not continuing to act as a proxy for the US.”

He said if Iran was harassing ships, that was wrong, but he described its plans to enrich uranium beyond the limits set in the deal as “trifling, symbolic and a cry for help”.