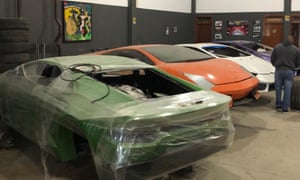 Father and son accused of offering the cars on social media for less than $70,000 – a fraction of the price of the real things

After receiving the tip-off, it did not take investigators long to find what they described as a “clandestine luxury car factory” manufacturing fake Ferraris and Lamborghinis in the south of Brazil.

On Monday, police in Itajaí, a seaside city of 215,000 people in Santa Catarina state, raided a garage where they found eight vehicles – two “Ferraris” and six “Lamborghinis” – in various states of completion, the detective Angelo Fragelli told the Guardian. “Some were half ready, some were just being started,” he said.

Photos and a video released by the police showed the vehicles, along with bonnets and seats with Ferrari and Lamborghini logos.

“The motors were much less powerful,” Fragelli said. “The finishing depended on what the client could pay.” 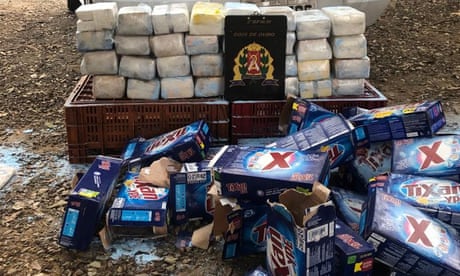 No arrests were made, but police said they would charge a 53-year-old man and his son, 29, who were not arrested, for intellectual property offences.

The cars were documented as “prototypes”, he said. “But there are indications of fraud because you can’t register a homemade prototype car with a registered car logo.”

Police had been informed of the garage by a São Paulo law firm, who had been retained by Lamborghini after alerting the car company to the replicas.

Bruno Ariboni Brandi, a lawyer from Ariboni, Fabbri & Schmidt, said his firm had worked on similar cases before spotting the adverts. In February, police raided a similar workshop near São Paulo, but Brandi said the Itajaí workshop was believed to be the biggest in Brazil.

“This is a company that has been investigated for some time,” he said. “We also collected information from dissatisfied customers … The cars are low-quality. Even though they use good quality material, their interior finishing is not the same as the originals.”

In an email, a Lamborghini spokesman said the company did not intend to prosecute but wanted to avoid the “unlawful use of rights” and stressed “the risk for customers and the public in general” presented by replicas lacking “basic safety features”. Ferrari did not respond to questions.

Autos Fibra still has a functioning Instagram account and YouTube channel. Reached by phone, one of the men facing charges declined to answer questions and referred to a video posted on YouTube on Tuesday. In it, two men attacked “sensationalist” and “rotten” media that wanted to “denigrate” their company.

“We did not close. We are working normally. There are cars being made for customers there and our commitment is to finish these cars,” said the elder of the two men, explaining that the company had been in operation for 25 years.

He said the company produced “artisanal cars” legally under a Brazilian regulation and that the investigation would show that the vehicles seized did not “100%” match industrial designs and therefore would be shown not to be replicas.

Brandi, the lawyer, disputed this. “The law of industry property prohibits the use of industrial designs and logos,” he said.