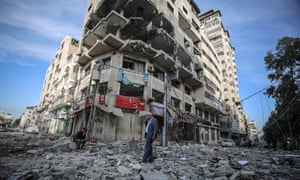 Turkey’s president has attacked what he called “Israeli terrorism” after the Gaza office for the Turkish state-run news agency was destroyed during the latest round of hostilities between Israeli forces and Palestinian militants.

“We strongly condemn Israel’s attack against Anadolu agency’s office in Gaza,” Recep Tayyip Erdoğan said on Twitter. “Turkey and Anadolu agency will continue to tell the world about Israeli terrorism and atrocities in Gaza and other parts of Palestine despite such attacks.”

During the weekend, more than 430 rockets had been fired out of Gaza, which Israel said it responded to with 200 air and tank strikes. One Israeli civilian and six Palestinians, including two militants, had been killed, officials on both sides said.

The dead in Gaza included a pregnant mother and her 14-month-old daughter, medics said, in the most recent of violent exchanges that have erupted on a near-monthly basis for the past year. Israel denied on Sunday that its forces had killed the mother and infant, saying they were hit by accidental militant fire.

The latest round began on Friday after a Palestinian Islamic Jihad sniper fired at Israeli troops, wounding two soldiers, according to the Israeli army. Israel responded with an airstrike that killed two members of Hamas, another faction that controls the strip. Israel says it holds Hamas accountable for all activity in Gaza. 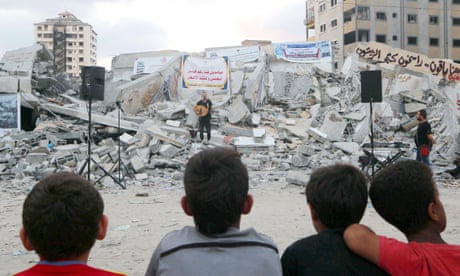 Reporting from Jerusalem: ‘the focus is always on how the story is told’

On the same say, Israeli forces killed two Palestinians demonstrating near the frontier, and on Saturday morning militants began rocket barrages that stretched into Sunday. The launches have often followed killings at rallies on the border, where Palestinians have been calling for an end to a debilitating Israeli-Egyptian blockade that has led to a dire humanitarian crisis.

Egypt has led a UN-backed effort to mediate a longer ceasefire between the two sides but repeated attempts have only won temporary lulls in the tit-for-tat conflict. Hamas and Islamic Jihad released a joint statement saying: “Our response will be broader and more painful if the enemy pursues its aggression.”

In southern Israel, air-raid sirens sent families fleeing to shelters. Dozens of projectiles were incepted by the country’s Iron Dome system, but several slipped through, hitting residential neighbourhoods and in one case, a school. Four Israelis, including an 80-year-old woman, were wounded.

Residents in Gaza City said explosions caused by Israeli strikes thundered throughout the night. Fireballs lit up the sky as several-story buildings crumbled in on themselves.

The escalation comes as Israel prepares to host the high-profile Eurovision song contest in Tel Aviv. That week will also mark the one-year anniversary since Israeli snipers killed nearly 60 Palestinians protesting at the frontier.