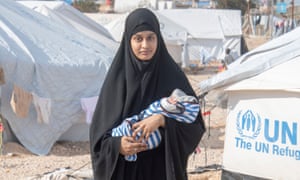 Syrian camps: vulnerable children of Isis ignored by the outside world

Sajid Javid has been accused of moral cowardice and “treating the UK as a banana republic” in pursuit of his leadership ambitions following the death of Jarrah, the three-week-old son of Isis bride Shamima Begum.

A Church of England bishop and a former director of public prosecutions led the chorus of outrage directed at the home secretary as demand grew for him to review his controversial decision to strip the 19-year-old of British citizenship – a move that left her stateless and her baby in legal limbo.

Syrian camps: vulnerable children of Isis ignored by the outside world

“This was an abject decision by a home secretary apparently so intent on furthering his leadership ambitions that he has lost sight of sovereignty, treating the UK as a banana republic incapable of regulating its own citizens,” said Lord Macdonald, who was director of public prosecutions of England and Wales between 2003 and 2008.

The peer, who oversaw a 2010 government review of counter-terrorism and security powers, told the Observer that Javid’s “opportunism has other costs, including a more dangerous world where stateless individuals roam with no allegiance, and the death of unprotected innocents, in this case a vulnerable British baby”. And he warned of blowback to the UK.

“No dignified self-governing state should abandon responsibility for its own citizens in this way, trying to dump them on to poorer countries with failed security arrangements. Mr Javid’s behaviour is a recipe for refugee chaos and moral cowardice of the worst sort,” he said.

“The home secretary has a responsibility to ensure people in this country are protected. We could have done this by taking her through due process and it is to be regretted if we are not following it, because this is a human rights issue.”

Begum, from Bethnal Green, east London, was 15 when she and two other schoolgirls went to join Isis in February 2015. She gave birth in a Syrian refugee camp last month, having already lost two children.

News that a third child had now died has left her relatives in London distraught. The Begum family’s lawyer, Tasnime Akunjee, said: “They are utterly crushed and despondent at the moment.”

Javid’s decision to strip the teenager of her British citizenship triggered a ferocious debate over whether she should be allowed to return and raised questions about the legality of his decision.

Shadow home secretary Diane Abbott tweeted yesterday: “It is against international law to make someone stateless, and now an innocent child has died as a result of a British woman being stripped of her citizenship. This is callous and inhumane.”

Lib Dem home affairs spokesperson Ed Davey said: “Many of us feared this tragic outcome when the home secretary washed his hands of Britain’s responsibility for a British citizen and a British baby. If the courts eventually show he has acted illegally in making a British citizen stateless, we will remember this baby in holding him to account.”

Several fellow Conservative MPs have also expressed anger at Javid’s position. Bracknell MP Phillip Lee said he was deeply concerned by the decision, which he believed was “driven by a sort of populism”.

Anna Soubry, who left the Tories to join the Independent Group, tweeted that Javid must now restore Begum’s citizenship. “Shamima Begum is our responsibility, whatever she may or may not have done, however abhorrent her views,” she said.

There are claims that Javid did not consult either the attorney general or the solicitor general before making his decision, something that could leave him vulnerable in the event of a legal challenge. When asked if this was the case, a Home Office spokesman said: “We do not comment on individual cases.”

Javid confirmed last month that Jarrah was a British citizen and said that he had considered the child’s interest when deciding to revoke Begum’s citizenship. But he told the Commons home affairs committee that it would be “incredibly difficult” for the government to facilitate the return of a child from Syria.

Conservative party chairman Brandon Lewis defended Javid. “The home secretary will have had advice and I know he made a decision based on what is in the national interest and the security of people here in the UK,” Lewis said. “There is no question that the duty of a home secretary in this country is to keep British people safe.”

The Begum family in the UK are understood to be exploring their legal options, including bringing a private prosecution against the home secretary. Tasnime Akunjee said he will soon be flying out to Syria to help Begum prepare her appeal. “I’m going to Syria to meet somebody who has lost three kids, so I can show her some paperwork which is quite dense, and so I can obtain her signature. It’s totally ridiculous,” said the lawyer.

Begum’s father, Ahmed Ali, speaking to the BBC from Bangladesh before he found out his daughter’s baby had died, apologised to the British people but asked for their forgiveness, saying his daughter should be allowed back to the UK and “punished if she had made any mistake”.

“She was under age at that time, she couldn’t understand that much. I suppose someone influenced her to do that,” he said. “I admit that she might have done wrong without realising it.”

Outside east London mosque on Saturday, few people wanted to discuss Begum’s situation. “I don’t want to chat shit and be put on some watch list for saying I feel sorry for her,” said one man in his 20s. “What she did was wrong, but what they’ve done is worse. They used all this power of the state against a teenage girl and her baby – and for what?”

In a Punjabi cafe in Whitechapel, a family of four were split in their views. Parents Sobia and Rizwan discussed whether Javid had been right to deny Begum the chance to return to the UK.

“I don’t think he did it with good intention,” said Sobia. “I understand why he did it, because he wants to show he won’t be soft on Muslims, but that was a baby’s life. He punished an innocent baby.”

However, her husband said it was important to demonstrate that there are serious consequences to joining Isis. Did he agree with the decision to make her stateless? “Obviously not now, because her baby has died and we are supposed to be a civilised country. But what is the law around it? We should be using the proper laws. Why isn’t the government going by their own rules?”