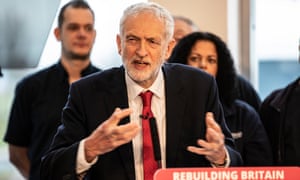 Labour MPs have been told to prepare for Jeremy Corbyn to table a dramatic and immediate vote of no confidence in Theresa May’s government as early as Tuesday evening in an attempt to force a general election if – as expected – she suffers a heavy defeat this week on her Brexit deal.

Messages have been sent to Labour MPs, even those who are unwell, to ensure their presence both for the “meaningful vote” on the prime minister’s Brexit blueprint on Tuesday and the following day. Labour whips have told MPs the no-confidence vote is likely to be tabled within hours of a government loss, with the actual vote taking place on Wednesday.

The news comes before what promises to be one of the most tumultuous 24 hours in recent parliamentary history in which, barring another delay, May will put her Brexit deal to parliament despite deep and widespread opposition across the Commons, including from many MPs inside her own party.

A senior shadow cabinet member said: “There is now recognition that we cannot wait any longer. If May goes down to defeat and she does not resign and call an election, this is the moment we have to act.”

Senior Tories said on Saturday that they could not see how the prime minister could win the meaningful vote “in any circumstances” and that a defeat by less than 100 would now be regarded as the best she could hope for.

But even if she suffered a loss of closer to 200, which many Tories fear could be the case, Conservative MPs and ministers still expect her to stagger on and seek to bring an improved offer back to the Commons for a further vote within weeks.

Although senior Labour figures accept they are unlikely to win a no-confidence vote, as the 10 Democratic Unionist MPs have said they will back the government, the move will highlight the fragility of May’s hold on power as the Brexit crisis deepens.

Yet should Corbyn fail to force an election, it will place the Labour leader under greater pressure from many of his own MPs, as well as party members and supporters, to throw his weight behind a second referendum as the way to break the Brexit impasse.

Labour’s current policy is to seek to force an election, and if it wins, to renegotiate a new Brexit deal. Senior shadow cabinet figures said any further delay in tabling a no-confidence motion will make that position untenable, as there will be insufficient time before Britain’s exit from the EU on 29 March to hold an election.

The Observer understands that if Corbyn were to delay tabling a vote of no confidence, senior Labour MPs would table one themselves in the hope of forcing the leadership to back a second referendum. Angela Smith, Labour MP for Penistone and Stocksbridge, said: “The time for prevarication is over. If May’s deal fails we have to test the will of the house and if we fail, we must consider all options including campaigning for a second referendum as this is party policy.”

A Labour spokesman, while not confirming a vote on Tuesday, said that while the timing of a no-confidence vote had not been fixed, MPs had been told to be ready. Barry Gardiner, the shadow trade minister, said last week that a vote of no confidence would “obviously” have to follow immediately after a defeat for May’s deal.

A Momentum activist, Michael Chessum, spokesman for the leftwing anti-Brexit campaign Another Europe is Possible, said that if Labour won the confidence vote, it would be time for Corbyn to back a second referendum as part of the Labour manifesto. If it lost, it should campaign for one as the official opposition.

He said: “Proposing a no-confidence motion is the first step for either scenario, and we need to get on with it.” Labour campaigners for a second referendum claim that the party’s policy forum has received more than 13,000 emails and letters urging Corbyn to oppose Brexit.

Writing in the Observer, London’s Labour mayor, Sadiq Khan said that he will step up his campaign for another referendum if an election is not called immediately: “A public vote would not only allow us to move beyond the current stalemate but would actually start the desperately needed process of healing the deep divisions that have opened within our society.”

If May stays at No 10, I’m starting Project Hope, the positive case for remain

Roy Hattersley, the veteran Labour politician, also threw his weight behind a second referendum on Saturday, saying the British people had “a right to cast a vote on the merits” of May’s deal.

Meanwhile, pro-remain cabinet ministers are preparing to push for a softer Brexit this week. In the event of a defeat for May, they are poised to back a plan B that would prevent Britain from signing its own trade deals.

It is understood some believe that joining a permanent customs union with the EU could be enough to secure a Commons majority for May’s deal. This could be one option put forward in a series of indicative votes to test the views of MPs on alternatives if her plan is thrown out. Such a move would potentially attract a bloc of Labour MPs.

With a critical week ahead, Tory rebels are already plotting a series of measures designed to hand more power to parliament over Brexit. One senior figure said that a “legally copper-bottomed” plan had already been drawn up to “give parliament control of the Brexit negotiation and stop a no-deal Brexit” should May’s deal be voted down.

A vote to show there is a Commons majority in favour of delaying Brexit is also being plotted by a cross-party group of MPs. “If we are not crashing out and we are not going for the PM’s deal, I cannot believe that article 50 does not have to be extended,” said one of those involved.

The business secretary, Greg Clark, also writing in the Observer, has appealed to pro-Brexit Labour MPs to back May’s deal, insisting that the government would protect workers’ rights when the UK is outside the EU. He pledged to back an amendment proposed by Labour MPs on the issue.