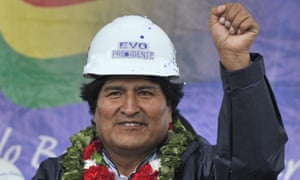 The socialist Evo Morales, who yesterday was re-elected to serve a third term as president of Bolivia, has long been cast as a figure of fun by the media in the global north. Much like the now deceased Hugo Chávez, Morales is often depicted as a buffoonish populist whose flamboyant denouncements of the United States belie his incompetence. And so, reports of his landslide win inevitably focused on his announcement that it was “a victory for anti-imperialism”, as though anti-US sentiment is the only thing Morales has given to Bolivia in his eight years in government.More likely, Morales’s enduring popularity is a result of his extraordinary socio-economic reforms, which – according to the New York Times – have transformed Bolivia from an “economic basket case” into a country that receives praise from such unlikely contenders as the World Bank and the IMF – an irony considering the country’s success is the result of the socialist administration casting off the recommendations of the IMF in the first place.