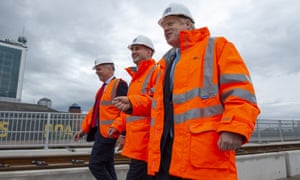 For the first time in years a Tory leader has a clear strategy and open chequebook. Labour must wake up to the threat

How to beat Boris Johnson? British politics has no question more urgent. The prime minister is mere weeks from crashing the country out of the EU, a feat for which he is even now buying public consent with £100m of propaganda. He has just appointed a cabinet whose top figures – from Dominic Raab to Jacob Rees-Mogg – espouse some of the most extreme ideological positions ever voiced in Whitehall. He has it all: the personnel, the politics and the imminent catalyst to reshape Britain and to rip up what remains of its social contract. And it falls to the rest of us to fight.

So where is the resistance? Much of the press remains slack-jawed with awe at every announcement from the new government

So where is the resistance? Much of the press remains slack-jawed with awe at every announcement from the new government, elevating even trivia such as the formation of administrative committees to front-page news. The mouthpiece of big business, the CBI, this week sounds the alarm that “there are no areas of relevance to the economy where the UK, the EU and the business community are all prepared well enough for no deal” – but then chucks Downing Street a bone and burbles on about “pragmatism and flexibility”. Then there is Her Majesty’s opposition.

During the pretend-race for the Tory leadership, I would canvass Labour contacts to see how they were braced for the coronation of Johnson. The responses betrayed little concern. He’d lost the love of the public, I was told. He wasn’t the old Westminster stand-up but had become instead Bad Boris of the Lying Bus. I believed this to be complacent, and said so . Over the weekend I did another phone-round, only to find top Labour people increasingly panicky, even while their party continues to slumber.

All last week, while Johnson was being chauffeured to the palace, making his victory speeches and assembling his first XI, Jeremy Corbyn held not a single meeting with his own politicians on the new prime minister and how Labour would fight him. Oh, it had come up at shadow cabinet, I was told, but “towards the end, and the discussion didn’t really go anywhere”. No major strategy meeting is planned.

“It’s as if nothing has changed – but everything has changed,” said one senior frontbencher, after surveying the Sunday front pages plastered with Labour’s biggest political threat in years. A Corbyn loyalist, he despairingly described a party already packing up for the holidays even as Johnson prepared for an autumn election.

Someone somewhere will doubtless take this article as yet another milquetoast Guardianista dashing off a moan in between composing a love letter to Owen Smith and a shopping list for Waitrose. The bad news for them is that I’m not that guy. The even worse news is that if Labour continues to sleep through the summer, it risks wipeout. For the first time in years, it faces a Conservative party leader with a clear strategy, a united team and an open chequebook. However much he clowns about, Johnson is a serious threat to Corbyn. He must be taken seriously.

None of this contradicts my colleague Polly Toynbee’s observations about the gaping holes in Team Johnson . Indeed, let me add more lines to her litany: Priti Patel was sacked in disgrace after secret meetings with Israeli officials, while in theory Gavin Williamson still faces the possibility of a criminal investigation for leaking state secrets – yet both now enjoy cabinet posts at £145,000 a year. How the fallen are mighty! Honeymoons are but fleeting affairs, as Gordon Brown could tell you. The parliamentary arithmetic for Johnson remains dire, while Brussels shows no sign of deserting Dublin over the backstop. And wait until the sliding pound doesn’t just spoil summer spells in Mallorca but pushes up the cost of the weekly shop at Morrisons.

And yet, and yet. Noël Coward once remarked on “the potency of cheap music”, and politics is no different. Labour’s campaigning strategy since 2017 has been predicated on the fact that in Theresa May it faced a mortally wounded and half-hearted foe. Hell, she couldn’t even turn a commanding poll lead into a Commons majority. Of course Corbyn could negotiate a better Brexit! May might name “the burning injustices” but only Labour would spend the billions to fix them. You can’t say the same of Johnson, who gladly gives Brussels the finger. His strategy is essentially the same as May’s one-time adviser Nick Timothy urged on her: to turn remain v leave into the sole dividing line of our times and so steal blue-collar seats off Labour. Only this time, 11 Downing Street has a chancellor willing to write his cheques.

Johnson has already scored headlines merely for reheating old promises by George Osborne and May on the “northern powerhouse” and on towns – just wait until he really starts to splash the cash. Trussed up in a hard hat and hi-vis jacket he will gambol about the north, looking like Bertie Wooster conducting an ethnographic study of a building site – and all the while robbing Corbyn of his leave voters. Marxist grandpa won’t give you the Brexit you want, will run the new blue message, come with me. Meanwhile, here’s a few million to electrify your train line, or for your local car plant. This will go on until Britain leaves the EU or No 10 calls an election, whichever comes first. So what if the Conservatives lose Richmond Park, as long as they gain Crewe and Nantwich?

How does Labour fight this? Well, it can ignore Alastair Campbell, who suffers the chronic ailment of the ageing greyback in believing that any story, however big, is always about him. Ditching Corbyn this close to an election will plunge the opposition into chaos. Nor do I put much faith in fact-checking Johnson’s more outrageous claims or past. Much of the public will shrug, believing quite rightly that chameleons are meant to change while bullshitters specialise in bullshit and that their new prime minister is both. Instead, I would suggest three main things.First, it needs to come out wholeheartedly for a second referendum and remain. There is no future in doing anything else against a government that treats no deal as a test of its virility. I have been among those urging Labour not to go along with this hard-right plot to feed the country to the vultures, and frustrated as it tweaks its position every fortnight: enough. If need be, appoint a spokesperson who can argue the case for remain without physically squirming.

Jeremy Corbyn, I no longer want to be a member of your Labour party

Second, it needs to go bigger and bolder on its spending commitments, making clear the money will not be disbursed from Westminster solely on big infrastructure projects but will be entrusted to local communities to spend. Every time Johnson promises some spending, Labour should retort: which are you going to believe, his press releases or the devastation you can see on your high street, at your town hall and local food bank? We’ll fix that – in partnership with you. The shadow chancellor, John McDonnell, has spoken imaginatively about public works, but he should concentrate on putting more money into the pockets of those who have none – by fixing our broken social security system. That means scrapping universal credit and rolling back the meanness of our means-tested benefits.

Finally, Labour needs to shrug off its historic complacency about its heartlands. The decline of the trade unions has taken with it a whole tradition of civic labourism that used to turn workers into voters. In Momentum, Corbyn has a self-described social movement that ought to be laying on advice about how to get the benefits you’re entitled to and how to tackle rogue landlords and predatory bosses.

I share the frustration many have with Labour as it has dragged its feet over antisemitism and Brexit. It has been appalling. But if Johnson gets his way with Brussels and at the next election, that will certainly be the end of any hope of a leftwing government for a generation. Think through the ructions that could follow, and it may mean Labour reduced from a mass party to the kind of shrunken husk German voters now see in the Social Democratic party. The stakes are that big. I return to my starting thought: the task is to beat Boris Johnson and the low dishonesty of his hard-right chumminess.

• Aditya Chakrabortty is a Guardian columnist