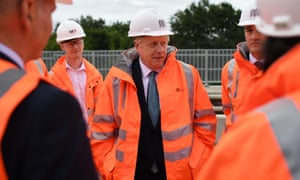 Boris Johnson’s ambitious domestic agenda would be crushed by the pressing needs of the emergency that would follow a no-deal Brexit, a new report by a Whitehall thinktank has concluded.

The Institute for Government (IfG) warned there is “no such thing as a managed no deal” and the hard Brexiters predictions of a “clean break” from the EU will not materialise.

Johnson will begin his first full week in Downing Street by ramping up planning for the possibility of a no-deal Brexit on 31 October, with more than £1bn to be announced within days for preparations by Sajid Javid, the chancellor.

He sent out a raft of cabinet ministers over the weekend to talk about “turbo-charging” preparations as part of a publicity blitz, making clear that the UK will be heading for no deal unless EU leaders agree to replace the Irish backstop.

The new prime minister is also heading to Scotland, Wales and Northern Ireland in the coming days to promise to “strengthen the union”, but he faces a difficult meeting with Ruth Davidson, the Scottish Conservative leader, on Monday as she warned over the weekend that she cannot sign up to his no-deal Brexit strategy.

In its report on no deal, the IfG predicted that the union of the United Kingdom would come under “unprecedented pressure” in the event of a no-deal Brexit, with Northern Ireland “most acutely affected”.

It said that legislation to introduce direct rule in Northern Ireland with immediate effect would be needed to get through a no-deal Brexit if the devolved government is not restored by the end of October.

“Johnson may well find that having left one political union, he spends an increasing proportion of his time trying to keep another together,” it said.

The IfG, which has offices next to the Foreign Office near St James’s Park, has regular access to lawmakers and top officials enabling it to give frank assessments on all aspects of government.

Its publication comes just days after Johnson unveiled plans for a high-speed rail link between Manchester and Leeds, 20,000 new police officers and extra money for social care and schools. The pledges appear designed to appeal to the public in an election, fuelling speculation that Johnson is preparing for one even though he is publicly ruling it out before Brexit happens.

However, the report outlines just how uncertain the future would be for Boris Johnson after a crashout, suggesting everything other than Brexit would be overshadowed.

In another sign of the uncertainty Johnson faces, the owner of Vauxhall warned on Sunday that it will close its Ellesmere Port plant with the loss of 1,000 jobs if Brexit renders it unprofitable.

“No deal is a step into the unknown: the prime minister’s second 100 days will be even more unpredictable than his first,” the report says, adding that the EU is unlikely to agree to negotiate any “side deals” to soften the impact.

“Rather than ‘turbo-charging’ the economy, as Johnson has suggested, the government is more likely to be occupied with providing money and support to businesses and industries that have not prepared or are worst affected by a no-deal Brexit – as well as dealing with UK citizens in the EU, and EU citizens here, who have been similarly caught out,” it says.

The authors reveal that the government’s planning assumptions are “locked away on secret computers known as Rosa terminals” across Whitehall in classified documents but warns that “as the name suggests these are just assumptions”.

Nobody can predict how the country, businesses and ordinary voters will react to no deal, something the IfG has been saying for some time, say the authors, Joe Owen, Maddy Thimont Jack and Jill Rutter.

“The risk registers that exist across Whitehall for a no-deal Brexit may have detailed plans for how to manage anticipated risks.

“But some of the biggest potential headaches will come from those issues that have not been foreseen,” the reports concludes.

With Labour, the Scottish National party, Liberal Democrats and up to 40 backbench Tories all pledging to fight a no-deal Brexit, Johnson has begun a campaign to try to convince the public and MPs that his government will be ready if necessary.

No 10 revealed that Johnson has tasked a series of new cabinet committees with preparing for no deal, with overall responsibility going to Michael Gove, effectively now a minister without portfolio.

The prime minister spoke to his cabinet at lunchtime on Sunday to outline a new “daily operations committee” codenamed XO. It will be chaired by Gove and meet in the Cobra emergency situation room, with live actions, deadlines and lines of accountability on screens at every meeting. Others involved include an all-male lineup of Javid; the foreign secretary, Dominic Raab; the Brexit secretary, Steve Barclay; and Geoffrey Cox, the attorney general.

There will be two other Brexit committees chaired by the prime minister – an exit economy and trade committee – meeting regularly, and an exit strategy committee meeting twice weekly.

Dominic Cummings, the mastermind behind Vote Leave, who has been hired as Johnson’s special adviser, has been tasked with delivering Brexit “by any means necessary”.

In a meeting with fellow special advisers, he made it clear that he believes No 10 can outmanoeuvre parliamentary critics of no deal and force Brexit to happen by 31 October. However, leading former cabinet ministers – Philip Hammond, David Gauke and Rory Stewart – are all preparing to join the cross-party battle to make sure parliament has a say on the form of the UK’s departure.

One source close to the group said Cummings’s confidence of being able to proceed with a no deal if necessary was “misplaced”, while another former cabinet minister described the senior No 10 adviser as a “master of disinformation and spin”.

The IfG report warned that Johnson’s emergency efforts, now led by Cummings and Gove, will drain the capacity of Whitehall and government and crowd out his ambitions for domestic reforms.

It pointed out that Theresa May said her priority was stamping out “burning injustices” when she assumed power and Johnson’s ambitions could similarly be stymied.

“Deal or no deal prime ministers need time, capacity and political capital to spend on their priorities,” the authors say, warning how a Brexit crisis could swamp efforts.

“Brexit is likely to preoccupy the work of the civil service for years to come. There will be at least 16,000 officials working on it by the autumn, and that number could still increase,” it says.

“Delivering a no-deal Brexit would leave the prime minister with little space for an ambitious domestic agenda.

“Whitehall would be working flat out on Brexit for months, with many areas of work extending for years,” the report adds.

No matter how keen Johnson and his new team are to institute a new domestic agenda, “major showdowns in parliament would continue, on the budget or Queen’s speech – both due shortly after 31 October”, says the report.

“The difficult choices that have been unresolved for the last three years will not evaporate overnight on 31 October. And Brexit will remain the key dividing line in a parliament in which Johnson’s government has a wafer-thin majority, and one that is constantly under threat,” it concludes.

In the coming weeks, it says the whole of government must shift to no-deal planning with thousands of civil servants moved to operational no-deal centres immediately.

The report also suggests an emergency Brexit budget may be needed in the autumn, something the new chancellor is said to be looking at already.

A second report by the Confederation of British Industry out on Monday will say neither the UK nor the EU are ready for no deal.