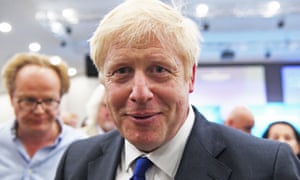 Boris Johnson has claimed he is “not bluffing” over his commitment to take the UK out of the European Union on 31 October with or without a deal and has criticised Theresa May for a “diet of miserablism”.

The Conservative leadership frontrunner said the EU had to “look deep into our eyes” and realise the UK was prepared to walk away on Halloween.

Johnson, who is 48 points ahead of Jeremy Hunt in the leadership contest according to a polling of party members, also lambasted May for a “computer says no” approach in government.

It comes after the former foreign secretary was mocked by his sister Rachel for claiming “too often” English was not being spoken as a first language during a hustings. She tweeted “We spoke Ancient Greek at home I genuinely don’t know what he’s on about.”

Asked if his commitment to the 31 October deadline was a bluff, Johnson told the Sunday Telegraph: “No … honestly. Come on. We’ve got to show a bit more gumption about this.”

He added: “We were pretty much ready on March 29. And we will be ready by October 31. And it’s vital that our partners see that. They have to look deep into our eyes and think ‘my God, these Brits actually are going to leave. And they’re going to leave on those terms’.

“Everybody who says ‘I can’t stand the idea of a no-deal Brexit’, what they really mean is actually they don’t want to leave at all.”

In a hustings in Cardiff on Saturday , Johnson said: “If we had to come out on WTO [World Trade Organization] terms, I really think this country has the versatility and the creativity to get through it and prosper and thrive.”

EU figures have insisted they will not renegotiate the exit deal agreed with the prime minister.

It comes as pro-EU MPs, led by the former attorney general Dominic Grieve, were planning an amendment to government legislation in an attempt to prevent the Tory frontrunner from stopping parliamentary opposition to a no-deal Brexit.

The home secretary, Sajid Javid, on Sunday pledged his support for Johnson before a speech on Tuesday in which he will call for an emergency budget to prepare for a no-deal Brexit.

Javid is expected to say: “Trust in our democracy will be at stake if we don’t make 31 October a ‘deal or no deal’ deadline. To prepare that, we are agreed on the need for ramped-up no-deal preparations, including a budget.”

Johnson has said crime would be his top priority in government, adding: “We need to give [police officers] back a bit of confidence again, that they can do what they signed up to do without people coming down hard on them and clobbering them’.”

The former mayor of London also hinted he could reduce VAT, which stands at 20%, saying: “I do think there is scope to bear down on taxation and particularly taxation that affects people on low incomes.”

Following his confession last month that he likes to make model buses out of wine crates in his spare time, the MP for Uxbridge and South Ruislip in west London has admitted to watching reality show Love Island and being “totally baffled by it”.

He said: “I have to admit I don’t understand it at all. I find it’s all these bodybuilders crying. Terrible things seem to have happened in their lives. I don’t understand why they’re so upset. I watched it but I’m totally baffled by it.”

Sorgente: Boris Johnson ‘not bluffing’ about quitting EU on 31 October with no deal | Politics | The Guardian