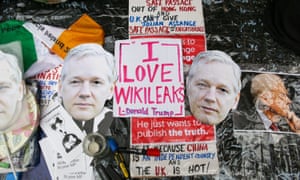 The shadow home secretary, Diane Abbott, has urged Theresa May to block the extradition of Julian Assange to the US in the same way she intervened in the case of the computer hacker Gary McKinnon.

In 2012, as home secretary, May halted McKinnon’s extradition on human rights grounds after doctors warned he was at risk of suicide if sent to face trial in the US. Abbott said similar grounds should be used to block Assange’s extradition. 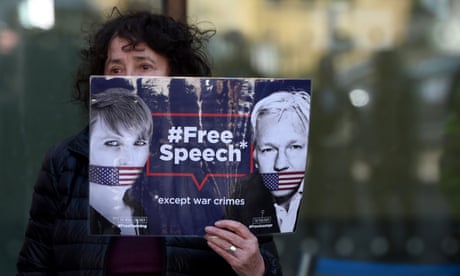 On Thursday, the Wikileaks founder was arrested on behalf of the US authorities, who have charged him with involvement in a computer hacking conspiracy.

The 47-year-old faces up to 12 months in a British prison after he was found guilty of breaching his bail conditions. The US charge could attract a maximum jail sentence of five years, according to the US Department of Justice.

Speaking on BBC Radio 4’s Today programme on Friday, Abbott said: “If you remember the Gary McKinnon case, the Americans insisted on extraditing him. He had done this massive computer hack, but his real crime was to have embarrassed the American military and security service.

Abbott described the allegations facing Assange from two women in Sweden as “serious”, but said charges were never brought.

She said: “If the Swedish government wants to come forward with those charges I believe that Assange should face the criminal justice system.”

But she added: “It is not the rape charges, serious as they are, it is about WikiLeaks and all of that embarrassing information about the activities of the American military and security services that was made public.

“He is at the very least a whistleblower and much of the information that he brought into the public domain, it could be argued, was very much in the public interest.

Jeremy Corbyn, the Labour leader, has also urged the government not to extradite Assange, saying he had exposed evidence of atrocities in Iraq and Afghanistan.

Almost 12 hours after Assange was arrested, Corbyn tweeted: “The extradition of Julian Assange to the US for exposing evidence of atrocities in Iraq and Afghanistan should be opposed by the British government.”

He accompanied his social media post with a video tweeted by Abbott, which she said showed leaked Pentagon footage of a 2007 airstrike in Iraq that implicated US armed forces in the killing of civilians and two journalists.

Addressing the House of Commons on Thursday, Abbott said Assange was in the “crosshairs of the US administration” over his whistleblowing activities.

She said: “On this side of the house we want to make the point that the reason we are debating Julian Assange this afternoon, even though the only charge he may face in this country is in relation to his bail hearings, is entirely due to the whistleblowing activities of Julian Assange and WikiLeaks.”

She added: “It is this whistleblowing into illegal wars, mass murder, murder of civilians and corruption on a grand scale, that has put Julian Assange in the crosshairs of the US administration.

“It is for this reason that they have once more issued an extradition warrant against Mr Assange.”

Meanwhile, Assange’s mother railed against May and Ecuador’s president in a stream of tweets demanding the release of her son. Pledging to “fight like hell”, Christine Assange said May was “trying to divert attention away from her Brexit dog’s breakfast by cheering on the thuggish, brutal, unlawful arrest of my courageous, tortured multi-award winning journalist son Julian!”

Addressing Ecuador’s president, she tweeted: “Shame on you Lenín Moreno! May the Ecuadorean people seek vengeance upon you, you dirty, deceitful, rotten traitor! May the face of my suffering son haunt your sleepless nights … And may your soul writhe forever in torturous Purgatory as you have tortured my beloved son!”