MH370: five years of theories about one of aviation’s greatest mysteries | World news | The Guardian

Years after the plane disappeared with 239 people on board, experts are still unsure where it crashed or why

Since then, the most expensive underwater search in history has failed to find it, and authorities are no closer to figuring out why, 40 minutes into what should have been a six hour flight, MH370 diverted and flew towards the southern Indian Ocean with 239 people on board.

Theories abound about why the plane disappeared, and where it can be found. Some have changed, some have been discredited, and new theories have emerged, as search after search has failed to end one of aviation’s greatest mysteries.

In the immediate, confused aftermath, an early theory suggested MH370 had been taken, not south into the sea, but north into central Asia.

This (now-discredited) theory initially had some basis in fact, based on the different ways in which MH370 was tracked. 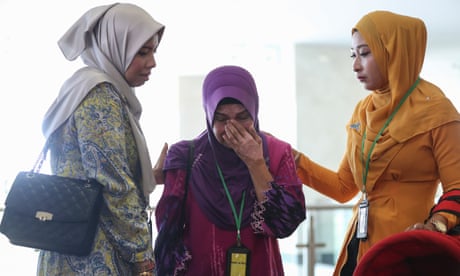 MH370 first “disappeared” when it turned off its transponder, causing it to vanish from civilian flight tracking after 40 minutes of flying. However, investigators could still track it using military radar, which gives a precise, physical location.

Through radar, we know MH370 started on a north-east route to Beijing, then turned and flew south-west, and then turned again, heading north-west, up towards India. But then radar coverage cut out.

After that, investigators had to use satellite data for the rest of MH370’s journey. Satellite data cannot pinpoint a plane’s position, but places it in a range that forms a circle, with the satellite at the centre. The satellite data showed MH370 was travelling further and further away from the satellite – but it was unknown whether it was moving south towards the sea near Australia (which required another turn), or was moving north and inland into Asia.

However, this northern landing idea was debunked by the company that owned the satellite, Inmarsat, and further refuted in 2015 by the discovery of debris off the coast of Africa.

2015: A ‘mass hypoxia event’ and a crash near Western Australia

In 2015, debris confirmed to be from MH370 washed up on a series of beaches across east Africa.

Not only did this confirm the plane was not intact, but modelling of ocean currents concluded that MH370 crashed in the southern Indian Ocean near Western Australia, and ocean currents then transported debris to Africa a year later.

MH370 could not have crashed in Africa, investigators said, because the satellite data was consistent only with a journey south-east into the southern Indian Ocean.

Meanwhile, authorities and experts speculated that some kind of fire, accident or malfunction broke out on board which caused the plane to divert in search of an emergency landing.

Then, the theory goes, the accident caused a “mass hypoxia event” (i.e: a loss of oxygen) which knocked out the crew and passengers before they could land. Once they were unconscious, the plane kept flying on autopilot over the Indian Ocean until it ran out of fuel.

The hypoxia theory – which concludes that the pilot, captain Zaharie Ahmad Shah, was unconscious at the end of the journey – is still the current official theory of the Malaysian government and the Australian Transport Safety Bureau (ATSB).

In 2016, US investigators and the ATSB discovered that the personal flight simulator in Captain Zaharie’s home had been used to draft a route into the southern Indian Ocean, similar to the route believed to be taken that fateful day.

But the ATSB immediately denied that this was proof Zaharie diverted the plane on purpose, or as part of a planned murder-suicide.

It has never been confirmed whether Zaharie himself plotted the route, or whether someone else did. His family also said he “loved life”, had an unblemished flying record and would never crash the plane deliberately.

In the years since, the Malaysian government has continued to refute the “rogue pilot” theory, and re-advance the theory that Zaharie was unconscious and the victim of an accident.

In 2017, the ATSB released its most comprehensive report into the mystery. The Australian government body had been searching since 2014, and covered 120,000 sq km.

The first was the same unconscious pilot theory. However, the ATSB provided new evidence. They said the plane entered the water at a “high and increasing rate of descent”, meaning it was free-falling and the pilot was unconscious.

The second theory was that a small new area – called the “priority zone” – located just north of their failed search, was probably the final location of MH370.

While the ATSB had not actually searched the “priority zone”, they said a re-analysis of evidence meant they were more confident than ever that MH370 lay there – and urged future searchers to explore it.

2018: A conscious pilot and a ‘controlled ditching’

US company Ocean Infinity searched the area for months on a no-find, no-fee contract with the Malaysian government. Though hopes were initially high, they found nothing. They moved on even further north, then even further – all with no success.

The failure of the 2018 search sparked a re-thinking of the accepted wisdom.

The “priority zone” was based on the assumption that when MH370 ran out of fuel, Zaharie was unconscious, and the plane sharply fell into the sea. Thus the search area was located very close to where the fuel ran out (which we know via satellite data).

But the failure to find MH370 close to the fuel exhaustion point led some to argue the plane did not drop so steeply. A theory, put forward by former pilot Simon Hardy and others, said Zaharie was awake and guided the plane in a long glide or “controlled ditching” once it ran out of fuel.

If MH370 glided, it could have travelled up to 200km further than had been assumed – which would explain why no search has been able to find it.

At an appearance before the Australian senate, a top ATSB official rejected this. Peter Foley said Zaharie, who was “53 and overweight” would have been knocked out if he tried this, and any attempt to knock his crew out would give himself decompression sickness.

The plane also could not have been in a “controlled ditching”, he said, because the ATSB data from 2017 already proved the plane was in a “high and increasing rate of descent” in its final moments.

At the five-year anniversary of MH370’s disappearance, with a combined 200,000sq km covered without success, there is still no conclusive evidence of where it crashed, and even less evidence about what caused it.

The most recent Malaysian government report revealed essentially nothing new. Tabled in 2018, it was initially billed as a “final report”, until its lack of information and outrage from families caused the government to backtrack on this.

Also in 2018, a branch of the French police force – the Gendarmerie Air Transport – announced they would launch an investigation into the way the satellite data was collected. The investigation is still ongoing – with no updates as yet.

In 2019, the Malaysian transport minister, Anthony Loke, said he was open to re-starting the search if he receives a good offer, and Ocean Infinity, when they reluctantly called off their search in 2018, said they were willing to start again.

Sorgente: MH370: five years of theories about one of aviation’s greatest mysteries | World news | The Guardian