“We are here today because George Floyd is not here,” Ellison, a Democrat, said at a news conference in St. Paul, Minnesota, announcing the charges. Ellison predicted that the prosecution of the officers could take months, and urged the public to be patient as his office builds cases.

“George Floyd mattered. He was loved. His family was important. His life had value. And we will seek justice for him and for you,” Ellison said. He noted that winning the cases “will not be an easy thing. Winning a conviction will be hard.”

“In order to be thorough, this is going to take months, and I do not know how many,” Ellison, a former U.S. representative who was deputy chair of the Democratic National Committee from 2017 to 2018, said. “But it is better to make sure we have a solid case, fully investigated, researched, before we go to trial, than to rush it. It will take a while and I can’t set a deadline on that.”

Chauvin, who is white, was charged Friday with third-degree murder and second-degree manslaughter after video footage emerged showing him kneeling on Floyd’s neck for nearly nine minutes as Floyd, a black man, lay handcuffed, crying out that he could not breathe.

At one point during the arrest Floyd also told the officers that “I’m about to die,” according to the charging documents filed Wednesday.

WATCH NOW
VIDEO09:27
Protests resurface racial inequities in U.S. economy—Six business leaders on how they plan to address them

The three ex-cops who had not yet been charged, Tou Thao, J. Alexander Kueng and Thomas Lane, assisted Chauvin in arresting Floyd on Memorial Day on suspicion that Floyd passed a counterfeit bill. All four officers were fired last week.

Drew Evans, superintendent of the Minnesota Bureau of Criminal Apprehension, appeared alongside Ellison and said that one of the officers charged Wednesday was in custody, and the other two were expected to be taken into custody later in the day.

He did not specify which of the three was already in custody. Chauvin has been in custody since last week.

FAMILY’S REACTION: This is a bittersweet moment. We are deeply gratified that @AGEllison took decisive action, arresting & charging ALL the officers involved in #GeorgeFloyd‘s death & upgrading the charge against Derek Chauvin to felony second-degree murder. #JusticeForGeorge 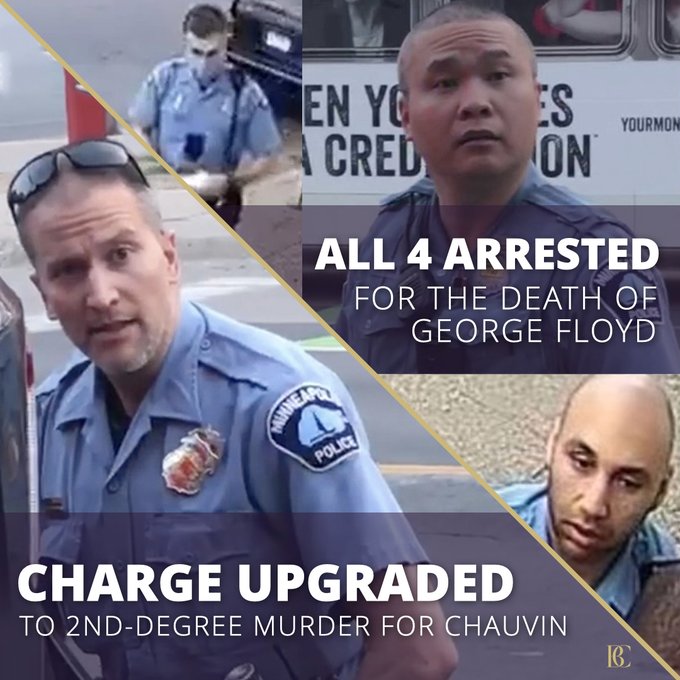 7,753 people are talking about this

The video shows that Chauvin continued to keep his knee of Floyd’s neck even after Floyd became unresponsive.

Floyd’s death has sparked widespread protests against police violence in dozens of cities across the country, with demonstrators and Floyd’s family calling for charges to be brought against Thao, Kueng and Lane.

The family also has demanded that Chauvin, 44, face a first-degree murder charge.

Ellison said that he did not allow public pressure to influence his decision-making.

“We made these decisions based on the facts that we have gathered,” he said.

Ben Crump, an attorney for the family, said in a statement earlier in the day that the family’s reaction to the charges was that it was “a bittersweet moment.”

“We are deeply gratified that @AGEllison took decisive action, arresting & charging ALL the officers involved in #GeorgeFloyd’s death & upgrading the charge against Derek Chauvin to felony second-degree murder,” Crump wrote in a post on Twitter.