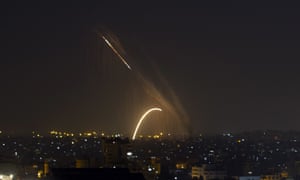 Israel and the Palestinian militant group Islamic Jihad have agreed to an Egyptian-mediated ceasefire, halting the worst bout of fighting in months.

However, later on Thursday, a barrage of at least five rockets were fired out of Gaza, sounding air raid sirens in southern Israel. It was not immediately clear if the renewed launches would restart confrontations.

The truce had gone into effect from 5.30am local time (0330 GMT), hours after medical officials said an Israeli bombing had killed eight members of a Palestinian family, including five children, who were sleeping at their family home.

Islamic Jihad spokesman Musab Al-Braim announced the agreement. It came roughly 48 hours after Israel sparked the fighting when it assassinated the faction’s top Gaza commander and his wife in an airstrike. Israel’s army had accused Baha Abu al-Ata of multiple recent attacks, calling him a “ticking bomb”.

A total of 34 Palestinians, almost half of them civilians, were killed as Israel bombarded Gaza for two days. In the same time, around 400 rockets were launched by militants into Israel, causing panic as civilians fled for bomb shelters.

Israel’s military said its Iron Dome defence system, which intercepts incoming projectiles, had a 90% success rate in downing rockets heading for residential areas. There were no Israeli deaths, although three people were wounded by shrapnel or debris. One rocket narrowly missed cars on a busy motorway.