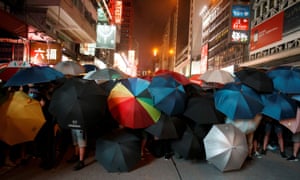 Hong Kong’s leader, Carrie Lam, has said a controversial extradition bill that has caused weeks of political crisis is “dead”, but has held back from completely withdrawing it.

“There is no such plan. The bill is dead,” the chief executive said at a press conference on Tuesday. Lam said she felt “heartbroken” over the conflict caused by the proposed law, which she described as a “total failure”.

Lam’s speech comes after weeks of protests by millions of residents against the proposed law in the city’s sharpest challenge to Beijing’s rule in decades.

Many see the proposed law as an encroachment of the territory’s autonomy, promised under the “one country, two systems” principle established when the former British colony was returned to China in 1997. Critics worry Beijing will use the law to extradite activists and political enemies to China.

Lam’s remarks were her strongest yet since the government suspended progress on the bill after mass demonstrations last month. She stopped short of meeting protesters’ demands to withdraw the bill, instead using the Cantonese phrase to describe the proposal as “reaching the end of its life”.

“We suspended it and we have no timetable. We reiterate that when the current legislature ends, ie July next year, it will be automatically expired,” Lam said. “What I said today is not very different from before, but maybe people want to hear a very firm response … the bill has actually died. So people won’t need to worry that there will be renewed discussions on the bill in the current legislature.”

Others criticised Lam’s refusal to formally withdraw the bill.

“‘Officially dead’ is not a legal or political term. So it’s still unclear whether it is withdrawn, and we can only assume it is not since she still has not said those words,” said Lokman Tsui, who teaches journalism at the Chinese University of Hong Kong.

Public opinion of Lam, a target of protesters who see her as a lackey for Beijing, has reached a new low and few trust her pledges.

“She said the bill is dead but in the legislative rules, there is only ‘postpone’ or ‘withdrawal’,” said a protester who asked to only give his surname, Ip. “I absolutely don’t trust her verbal promises,” he said.

On Facebook, comments posted under a live stream of her speech were critical. One posted: “So stubborn … she said nothing! Just suspended!!” Another said: “We need withdrawal!”

Pronouncing the bill dead while not withdrawing it appears to be a political compromise. Lam, who ultimately answers to Beijing, described the government’s response as the result of “deliberations of the various concerns and factors” and a “practical measure for us to move ahead”.

“I fully understand the responses of the government many not have met the wishes of the people, especially the protesters,” she said.

Lam also refused several of the protesters’ key demands, including her resignation and an independent investigation into police wrongdoing. Protesters and residents have accused the police of using excessive force on demonstrators. Lam did meet one concession of demonstrators, public discussions with student protesters. Previously she had only agreed to closed-door talks.

“She is still trying hard to put up with this strong leader face, refusing to succumb to the people … that could send a dangerous message to mainland dissent too,” said the pro-democracy lawmaker Claudia Mo. “Lam thinks she can stop a hill fire using a garden hose, but the young are not giving in, nor giving up.”

Hundreds of protesters clashed with police at the weekend as they blocked streets in the commercial district of Kowloon, following a march earlier in the day. Police arrested six people at the demonstration, while activists accused authorities of using excessive force on demonstrators and journalists. 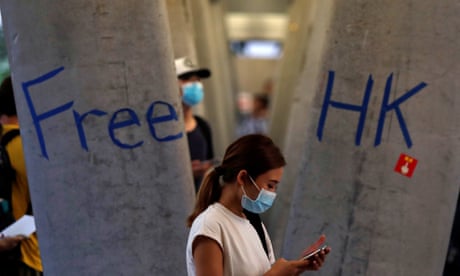 Rights under threat: how China is bringing Hong Kong to heel

The crisis in Hong Kong has spread beyond the territory. China has criticised “British intervention” in the former British colony after the UK foreign secretary, Jeremy Hunt, stressed his country’s support for Hong Kong’s freedom.

Last week, the outgoing US consul general, Kurt Tong, was barred by the state department from giving a critical speech on government actions in Hong Kong for fears it would derail a temporary trade truce between the US and China, according to the Financial Times.

According to the report, citing people familiar with the matter, Tong had planned a “kick-ass” speech to be delivered on 2 July at the Asia Society in Hong Kong, describing Beijing’s growing influence over the territory. Instead, the speech was watered down and made off the record at the last minute.

On Monday, the Hong Kong activist and pop star Denise Ho was repeatedly interrupted by a Chinese diplomat when she spoke at the United Nations on Monday. “We are all in danger in Hong Kong because we’re on the edge of becoming another [Chinese] city where we would lose our freedom of speech,” she said, calling on the UN to convene an urgent session on the territory.

Within three minutes of remarks, Ho was interrupted twice, with a delegate from the Chinese mission taking issue with her “unfounded allegations” against the “one country, two systems” framework and “abusive” language.