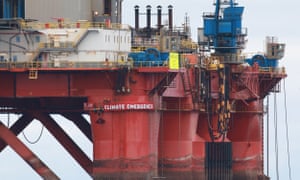 Greenpeace has escalated its protests against BP by putting two more activists on a North Sea rig in the Cromarty Firth, hours after the police removed other activists.

The environmental campaign group said two activists boarded the Transocean rig at 4am on Friday, six days after the first two climbed on in a protest at BP’s plans to use the rig to expand its drilling operations in the Vorlich field of the North Sea.

There have been nine arrests since the protest began, and three activists have already appeared in court in Tain and Inverness, charged with disorderly conduct. A warrant has been issued for a fourth defendant who did not appear in court.

John Sauven, the executive director of Greenpeace UK, said the protesters planned to stay on the rig for as long as they could. “BP are heading out to drill a new well giving them access to 30m barrels of oil – something we can’t afford in the middle of a climate emergency,” he said.

“We can’t give up and let oil giants carry on with business as usual because that means giving up on a habitable planet and our kids’ future. The UK government has announced a target of net zero greenhouse emissions by 2050 – we have started to enforce it.”

Greenpeace’s decision to resume its direct action will be seen as highly provocative by BP and Transocean, the US firm that operates the rig on behalf of BP, and Police Scotland.

Transocean secured a Scottish court order on Tuesday ordering Greenpeace and its activists to quit the rig. The police used about 12 specialist officers, who were flown on to the rig by helicopter, to remove and arrest two protesters on a gantry and an anchor on Thursday evening.

Ch Supt George Macdonald, the local police commander, said on Thursday night the Greenpeace protests had been potentially reckless and could have endangered people – a message echoed by BP.

“The particular nature of this protest on an oil platform within a marine environment made this an extremely complex and challenging operation,” Macdonald said.

BP accused Greenpeace on Thursday night of orchestrating a dangerous publicity stunt that endangered people. “We share the protesters’ concerns about climate change, we support the Paris agreement [to cap global temperature rises at 1.5C] and are committed to playing our part to advance the energy transition,” the firm said.

“However, progress to a lower carbon future will depend on coming together, understanding each other’s perspectives and working to find solutions, not dangerous PR stunts that exacerbate divisions and create risks to both life and property.”

The Paul B Loyd Jr rig is a 27,000-tonne platform named after a senior oil executive who founded a drilling company now part of the Transocean group. Transocean operated the Deepwater Horizon rig on behalf of BP that blew up in the Gulf of Mexico in April 2010, killing 11 oil workers and releasing 4m barrels of oil into the sea.

Transocean has not responded to requests to comment, but may take further legal action against Greenpeace, potentially suing the environment group for damages or seizing property.