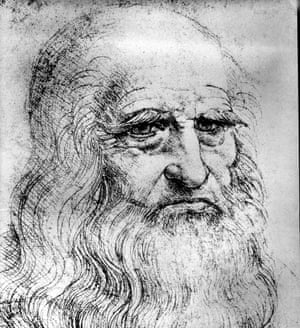 He was a Renaissance master – painter, scientist, engineer and inventor – who was hailed as one of the greatest artists who ever lived.

But as Europe stages a year-long frenzy of events to mark 500 years since Leonardo da Vinci’s death, Italy and France are engaged in a diplomatic tussle over him that threatens a blockbuster exhibition at the Louvre in Paris.

Leonardo, born the illegitimate son of a notary in the Tuscan hill town of Vinci in 1452, was an Italian humanist who spent his final years at the court of Francis I in the Loire, where he died on 2 May 1519.

Leonardo is Italian; he only died in France

His life and work has been subject to constant myth-making and legend – including the famous Ingres painting of him dying in the arms of the Valois king, who was in fact elsewhere baptising his son that day. But for Leonardo to now be dragged into the long-running political spat between Italy’s far-right ruling League party and France’s centrist president, Emmanuel Macron, has saddened historians and worried the museum world.

Negotiations have been stepped up this month to calm the row created when Lucia Borgonzoni, a League MP and undersecretary at the ministry of culture, recently suggested that her government would cancel the loan of some key paintings and draws agreed two years ago with Italian museums, accusing France of trying to take centre stage in Leonardo commemorations and “putting Italy on the margins of a major cultural event”. To make her point, she added: “Leonardo is Italian; he only died in France.”

The Louvre show is to open in October, as not to overshadow Italian commemorations in May. The museum holds five of only 14 paintings attributed to Leonardo – but had wanted to source from Italy some works considered robust enough to travel. In turn it was to lend Rome certain Raphael works for an exhibition next year. Keen to calm the row, the Louvre has made no public comment.

The Leonardos being sought by the Louvre from Italy are thought to include the famous drawing, Vitruvian Man, which is in Venice, as well as the unfinished painting, Saint Jerome in the Wilderness.

The French culture minister, Franck Riester, has said the deadlock needed to be dealt with through “peaceful” talks. He will meet his Italian counterpart, Alberto Bonisoli, next month to try to agree a deal. Bolsinari said he was not against the Leonardo loan agreement, but that there were some “imbalances” in the original deal that needed to be ironed out. The minister is member of the anti-establishment Five Star Movement, which is in power with the League.

“I hope [the meeting] happens soon as this situation of a diplomatic stalemate not only affects the Leonardo [events] but also paralyses all the exchanges with French museums, and this is a disaster,” said Barbara Agosti, art history professor at Tor Vergata University in Rome and a member of the committee overseeing the 500-year celebrations in Italy.

“This situation has been conducted in a clumsy manner – but the thing that loses the most in all of this is the story of art. It’s a pity for Italian and French museums, she added.

The spotlight is on other events opening in France, including at the Beaux-Arts Paris which has on display four Leonardo drawings as part of am exhibition of Renaissance drawings, many not seen in public before.

The art school’s location is significant because of another France-Italy row after the theft of the Mona Lisa from the Louvre in 1911.

After two years of police bafflement and misplaced suspicions around Pablo Picasso and the poet Guillaume Apollinaire, the Leonardo painting was discovered in Florence, stolen by an Italian criminal. It was duly brought back to Paris and went first to the Beaux-Arts school to be certified as authentic where it was put on public display for two days.

In more myth-making around Leonardo, the thief argued at the time that he wanted to return the Mona Lisa to its his rightful home after France stole it. But in fact the painting was taken by Leonardo to France in 1516 and bought by Francis.

Jean de Loisy, the head of the Beaux-Arts, said: “There is a universal passion for history and one of the world’s biggest artists cannot be reduced to base politics. Leonardo’s works are universal works, not just of Italy or France.”

Pascal Brioist, a Renaissance historian and Leonardo expert, said the artist’s relationship with France started early in his career among shifting patrons and geography that was very different from to today. “It’s wrong to imagine that Da Vinci was a patriot in the modern sense of the term because modern patriotism didn’t yet exist,” Brioist said.

Sophie Chauveau, who has written on Leonardo as a literary figure, said he was “a star who embodied the superlative. He had a human quality, an interest in everything, someone who was attentive to others. But he was never nationalist. He went where he could work. So little conflicts today over what he was seem ridiculous.”

Marc Lazar, who teaches at French university Sciences Po in Paris and Italian university the LUISS in Rome, said the political crisis between Macron and Matteo Salvini, the League leader and deputy prime minister, was the biggest between France and Italy since 1945.

But Lazar said the French president had recently begun to tone down his public comments against Salvini. France, Lazar said, clearly wanted “to avoid the political crisis having an impact on other sectors of activity, including on culture and museums and the 500th anniversary of Leonardo’s death”.