Frozen Arctic winds brought record-low temperatures across much of the US midwest on Wednesday, as a blast of Arctic air known as the polar vortex unnerved residents accustomed to brutal winters.

As of Wednesday evening, at least eight deaths were linked to the system, including an elderly Illinois man who was found several hours after he fell trying to get into his home and a University of Iowa student found behind an academic hall several hours before dawn. A man was struck by a snowplow in the Chicago area, a young couple’s SUV struck another on a snowy road in northern Indiana and a Milwaukee man froze to death in a garage, authorities said.

Classes were canceled Wednesday and Thursday in many cities, including Chicago, home of the country’s third-largest school system, and police warned of the risk of accidents on icy highways.

In a rare move, the US Postal Service appeared to temporarily set aside its credo that “neither snow nor rain … nor gloom of night” would stop its work: it halted deliveries from parts of the Dakotas through Ohio.

Temperatures in Chicago dropped to a low of around -23F (-30C) on Wednesday, slightly above the city’s lowest-ever reading, from January 1985. With the wind chill factor, temperatures in Los Angeles felt about 100F warmer than Chicago on Wednesday morning. 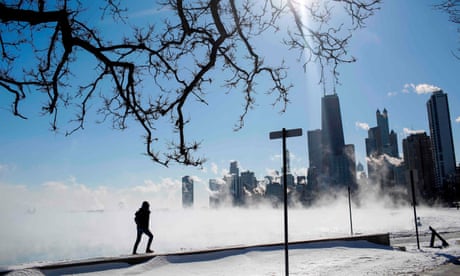 Andrew Orrison, a meteorologist with the service, said the some of the coldest wind chills were recorded in International Falls, Minnesota, at -55F (-48C). Even the south pole was warmer, with an expected low of -24F (-31C) with wind chill.

Temperatures in Chicago were expected to tumble again into the -20s fahrenheit (-30s celsius) early Thursday. Some isolated areas could see as low as -40F (-40C), according to the National Weather Service. Daytime highs could climb into the single digits before warming up to the comparatively balmy 20s (-7 to -2 celsius) by Friday.

In many cities, concern is especially acute for homeless people who may have nowhere to stay. Advocates said there are rarely enough shelter beds for all homeless people.

“I’m cold and I’m afraid,” Tony Neeley, a homeless Chicago resident, told the New York Times Tuesday evening. The mayor of Lansing, Michigan reported shelters in his city were becoming “overloaded,” and a senior advisor to the mayor of Detroit worried anyone who refused help would “freeze or lose a limb”, according to the Detroit News.

Some people shared pictures of their pet’s multi-layered winter outfits, and reminded people to bring pets inside.

At least 2,700 flights were canceled nationwide on Wednesday, largely in Chicago’s two main airports. Another 1,800 flights scheduled for Thursday were also called off.

Amtrak said it had canceled all trains in and out of the city, where Hurley forecast -15F on Wednesday and a record-low -27F on Thursday. In New York, interstates are closed to trucks for fear of invisible “black ice”. Government offices are closed in New Jersey as the western part of the state.

The bitter cold is being carried by the polar vortex, an area of low pressure which spins counterclockwise in the stratospheres over the north and south poles. The current of this low pressure area has been disrupted and is now pushing south.

Advised to stay home, some Americans are taking the cold in their stride. One Wisconsin woman filled balloons with water and food coloring on her porch railing, to make icy colored orbs. Some set soda cans outside and filmed as the cold caused them to explode.

Polar vortex: how cold will it be and what should the midwest expect?

“I about just got caught in a giant wreck; cars are into other pickups, there’s people hurt. I gotta let you go,” Jason Coffelt is heard saying in an Instagram posting dated Tuesday, as his truck is forced off the highway and pulls up just before a multi-vehicle accident.