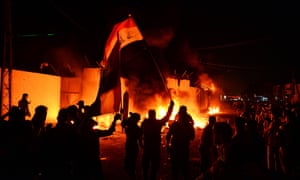 by Ghaith Abdul-Ahad in al-Shatrah and Nassiriya

In the southern Iraqi town of al-Shatrah, after canal-side cafes have shed the last of their customers and demonstrators occupying the central market square have dispersed to their homes, an eerie howl from a brass trumpet breaks the uneasy silence.

This is the signal for a group of young men to re-congregate for a night of personal and targeted action: burning the homes of local officials, politicians and militia leaders.

On a bridge over the Gharraf Canal, between outbreaks of chanting, the protesters debate about whose house to target. With the internet cut off, and heavily armed riot police roaming the streets, the young demonstrators here have turned to trumpet calls, an old and trusted way to communicate and organise battle campaigns.

Positioned at different corners in the town’s market, the trumpets – some old brass ones used in weddings and religious festivals, others brightly coloured plastic vuvuzelas – have their own code. A long sound means gather, a staccato burst means disperse. 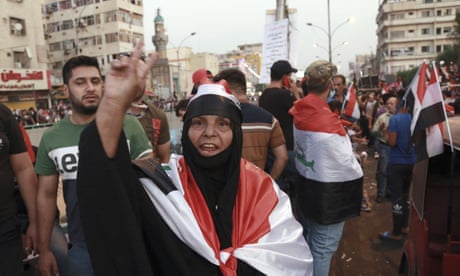 Like many towns and cities across Iraq, al-Shatrah has been the site of daily protests since early October, when hundreds of thousands of Iraqis took to the streets demanding a clean-up of the political system. The protests, fuelled by widespread perceptions of corruption, mismanagement, lack of services and unemployment, have swelled into a revolt against the ruling religious and political parties, and their affiliated militias, who are scorned by the young demonstrators as stooges of Iran.

The authorities’ response has been brutal: hundreds of people have been killed and thousands injured. Protesters have been “disappeared” by masked men or detained by security forces. Baghdad has seen most of the violence but it has also played out across the south.

In the capital, sit-ins and strikes by students have symbolised the hopes of a young generation yearning for a post-sectarian politics. But in the south, where Iran-backed militias are either stronger than the state or are the state, and where a party or a militia can dominate a single security apparatus, the rage and anger has been more personal and more vengeful.

In Ammara, for instance, a crowd burnt the headquarters of a powerful Iranian-backed militia. Guards opened fire, and during the ensuing clashes protesters pulled the militia’s injured commander from an ambulance and killed him.

“At the beginning only a few dozen people were protesting,” says a tall, 22-year-old protester in al-Shatrah. “But when local people heard the bullets and saw their young getting killed, they left their houses. It became a matter of honour and shame. We decided to liberate our cities from these parties.”

Many of Iraq’s most powerful politicians and militia commanders hail from the south, and there are five MPs from the small town of al-Shatrah alone. The prime minister, Adel Abdul-Mahdi hails from a neighbouring village. The region’s young people formed the backbone of the Shia militias that fought against Islamic State (Isis).

The anger towards the militias and political parties, activists say, began with the defeat of Isis, when young men returned from the frontlines to find that their commanders had turned into warlords, accumulating wealth and business contracts.

“So many politicians and officials come from here, and yet this a very poor town in a very poor province,” says Mohamed, a human rights activist and a vocal anti-corruption campaigner. “During the elections the politicians give people blankets and a few phone cards, hire a few men to the police, pave a road … that’s how they win votes. After 16 years of Shia rule, the Shia kids are now saying that things were better under Saddam.” 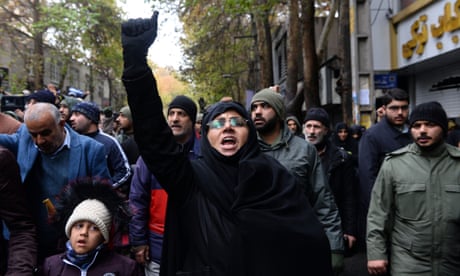 “Who are the Hashed?” asks a school director in al-Shatrah, referring to the paramilitary group established in 2014 from disparate armed groups and volunteers to fight against Isis. He answers himself: “Our children were the Hashed. These politicians and commanders climbed on their back to achieve their goals.”

For Mohamed, “the symbolism and the status of the Shia clergy have collapsed”. “If a militia commander came to the town square now he would be beaten with flip-flops.”

Across the south, and in Baghdad, the past 48 hours have been some of the bloodiest since the uprising began.

On Wednesday night, demonstrators stormed and torched the Iranian consulate in Najaf, a southern city of ancient pilgrimage shrines that serves as the seat of Iraq’s powerful Shia clergy. Protesters accused the Iraqi authorities of turning against their own people to defend Iran.

Before dawn on Thursday, security forces shot and killed 24 people who were blocking a bridge in Nassiriya. Armed members of two tribes entered the city to defend the demonstrators. Thousands of mourners took to the streets later in the day, defying a curfew to bury their dead after the mass shooting.

In Baghdad, troops opened fire with live ammunition and rubber bullets against protesters near a bridge over the Tigris river, killing at least four.

Back on the bridge in al-Shatrah, a name is suggested and then promptly rejected. His house has been burnt already. Another name comes up, but that too is rejected. Eventually, the group settles on local MP nicknamed Um Shadda, or mother of the bundle – a reference to the ten thousand dollars she allegedly charges people who want a government job.

“This is a small town, we know the officials and their families, we knew how they lived before and how they are living now,” says the 22-year-old demonstrator.

“Some of the people standing around me collect cigarette stubs from the streets to smoke, other are university graduates who can’t afford the price of a cup of tea. They see the children of MPs and officials who grew up with them driving land cruisers and spending money and running business and receiving public contracts. That is the injustice. Everything is personal here.”

An Iraqi mourner chants slogans during a funerary procession in the central holy Shia shrine city of Najaf on Thursday. Photograph: Haidar Hamdani/AFP via Getty Images