Think Boris Johnson is toxic to voters? Don’t be so sure | Gaby Hinsliff | Opinion | The Guardian 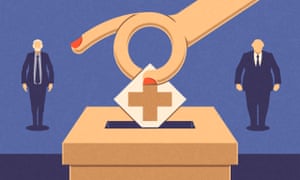 Boris Johnson has blown it, surely. Even the man who invariably gets away with murder – rising above things that would sink any mortal politician – can only push the Tory faithful so far. Or so I thought, at any rate, the night it emerged that police had been called to his girlfriend Carrie Symonds’ flat by worried neighbours.

Whatever happened between them – and the police went away satisfied it was nothing but a lovers’ tiff – the episode seemed at best embarrassing and distinctly un-prime ministerial. Surely older Conservatives, pens poised over leadership ballot papers, would worry about the risks of putting such a volatile character into No 10.

But I was wrong, just as Democrats were wrong to think in 2016 that women wouldn’t vote for a man caught on tape bragging about assaulting women, and just as remain campaigners were wrong to think people wouldn’t make a referendum choice that could render them poorer. During the summer, the Johnson camp succeeded in arguing, however preposterously, that the neighbours were the real villains here for wading into a private row, even one loud enough to hear from the street. It was a salutary lesson in not assuming that everyone is thinking what you’re thinking, and one I can’t get out of my mind as a general election looms.

Women for whom feminism is a dirty word may be a niche group, but there are more of them than liberals like to think

It has become a cliche to compare scandals to Rorschach blots – vivid splodges into which voters can read whatever they like, regardless of the facts. But while some women who voted for Donald Trump doubtless did so after convincing themselves that those who came forward to accuse him of sexual misdemeanours during the campaign must be lying, or that the media was out to get him – that’s not the the whole story. In exit polls, 70% of female voters said his behaviour towards women was a problem, yet a third of those with qualms admitted to voting for him anyway. These women knew what he was but didn’t let it stop them, and anyone who finds that difficult to believe is probably forgetting the moral gymnastics they may have executed in the past to support a candidate with whom they agreed about almost everything else.

Women came out in their droves for Bill Clinton in the 1996 presidential election, knowing full well he had at best repeatedly cheated on Hillary. Earlier this year, a ComRes poll found 15% of voters thought Labour had a serious antisemitism problem but were still planning to vote Labour anyway. Time and time again, the evidence suggests that party allegiances consistently override other considerations: voters will swallow more principles than they would probably care to admit in pursuit of whatever they feel matters more. But even fierce partisanship doesn’t quite explain why people often go against what seem, on paper, to be their best interests. The biggest factor in women backing Trump, according to a singularly depressing study carried out by the LSE, was that they shared his prejudices.

Women who were Republicans to start with were, unsurprisingly, 29% more likely to vote for Trump than those who weren’t. But women who scored highly for racial resentment, sexist attitudes and socially authoritarian values were 37% more likely to do so. These women weren’t holding their noses and voting for Trump despite his unreconstructed views – but because of them. Women for whom feminism is a dirty word may still be a relatively niche group in Britain electorally, but there are almost certainly more of them than liberals like to think.

One in four women in a recent poll for the charity Hope Not Hate agreed that “feminism is to blame of making some men feel marginalised and demonised in society”. Two-thirds of people polled for Sky News last year thought feminism had either gone too far, or as far as it should. Even at the height of the MeToo movement inspired by the downfall of Harvey Weinstein in 2017, some women still took it on themselves to argue that maybe young actresses shouldn’t go to producers’ hotel rooms late at night if they didn’t want to get assaulted, or that women should stop portraying themselves as helpless victims; just knee the office creep in the groin, rather than running to HR. There are rich pickings here for politicians unscrupulous enough to go after them – it’s a backlash waiting to be exploited.

Dazed and confused, Johnson stumbles into the twilight zone with a police escort

Too pessimistic? Perhaps. But the last three years have exposed the idea of a broad moral consensus, some unwritten national agreement on the red lines politicians shouldn’t cross, for the comforting myth it is. Old moral certainties are dissolving in the acid bath of Brexit. Being caught out in a barefaced lie isn’t necessarily a deal-breaker now, if you think all politicians are liars anyway. The Tories’ current poll lead seemingly confounds those who have spent decades arguing the party could only win by detoxifying the brand, appealing to women and minority voters – but what if the rules have changed?

After a week in which Johnson lost his majority, his control over Brexit and the trust of his brother in quick succession, it’s tempting to believe that his sidekick Dominic Cummings’ run of confounding conventional wisdom is over: Johnson will surely go on to lose an election too, on a surging tide of exasperated progressive votes.

But if he is arguably out of his depth running a government, Cummings has twice led winning referendum campaigns (on Brexit and on John Prescott’s plan for regional devolution to the north east) by exploiting the other side’s complacency; the sense that it was already in the bag, that voters couldn’t possibly fail to be thinking what you’re thinking. Maybe this time he’s wrong. But the lesson of the last three years is never to ignore that tiny, niggling voice of doubt.

• Gaby Hinsliff is a Guardian columnist

Sorgente: Think Boris Johnson is toxic to voters? Don’t be so sure | Gaby Hinsliff | Opinion | The Guardian