Hong Kong protests: subway to airport shut down as activists out in force | World news | The Guardian 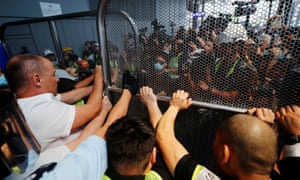 Thousands of pro-democracy demonstrators swarmed the Hong Kong international airport on Sunday, blocking roads and filling a bus terminus, in the latest wave of political unrest to hit the city.

Less than 24 hours after protesters and police clashed in running battles on Saturday, demonstrators attempted to paralyse the airport, a major regional hub.

Protesters were streaming toward the airport, blocking off a road leading to the departure hall. Outside the airport exits, protesters were dismantling fences and building barricades. Others faced down rows of police stationed at a bus terminus on the ground floor of the airport, chanting: “Liberate Hong Kong, revolution now!”

Dozens of police were patrolling the airport and blocked some exits.

As part of the “stress test” launched by demonstrators, three cars along a main highway leading to the airport appeared to have broken down. Several cars were slowing down, blocking the traffic behind them.

Authorities shut service on a train linking the city to the airport, while several buses stopped running. Authorities also set up road blocks and were seen searching cars approaching the airport. Police along a bridge were taking photos of approaching cars.

The demonstrations come after running battles with police throughout Saturday night and early Sunday morning, marking the 13th weekend in a row of mass protests.

Hong Kong is facing its worst political crisis in decades, triggered by a proposed bill that would allow extradition to mainland China. Demonstrations, which started in June, have morphed into a broader political movement demanding democracy for the semi-autonomous Chinese territory.

As the protests drag on with neither side showing signs of backing down, Hong Kong police have deployed harsher tactics on protesters. On Saturday, as helicopters hovered overhead, police fired rounds of tear gas and water cannons at protesters, staining them with blue dye to mark them for arrest later.

Late on Saturday, police stormed several metro stations, chasing and beating people believed to be protesters. In one incident, police stormed a train carriage in the Prince Edward train station in Kowloon, using batons to beat people in the car and spraying them with pepper spray. 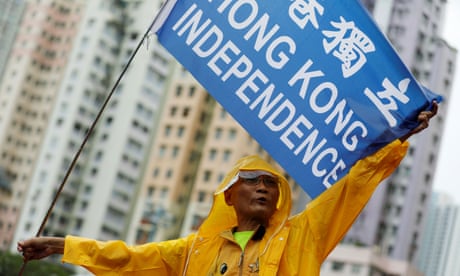 Reporting on Hong Kong: ‘What will happen to this wonderful city?’

Protesters have also escalated tactics, throwing petrol bombs and bricks at police, destroying cameras and ticket machines in the public transit system. Protesters built a pyre across a road outside the police headquarters in the commercial district of Wan Chai, and set it on fire.

On Sunday, the normally bustling Hong Kong was quiet and roads were empty. Several shops and malls had closed early during the previous day’s clashes.

“Day by day this doesn’t feel like Hong Kong,” said Joey Cheung, a taxi driver who was trying to get to the airport. “If Hong Kong keeps going this way, who knows what will happen. Either a police or a protester – someone is going to get killed soon, very soon.”

Last month, protesters shut down the airport for several days where they blocked travellers from reaching their flights and mobbed two men suspected of being spies, in ugly scenes for which protesters later apologised.

Sorgente: Hong Kong protests: subway to airport shut down as activists out in force | World news | The Guardian