Brexit: chants of ‘shame’ as suspension of parliament descends into chaos | Politics | The Guardian

There were extraordinary scenes of chaos and anger in the House of Commons overnight as opposition MPs staged a protest against the suspension of parliament for five weeks – a prorogation that the Speaker of the House said represented “an act of executive fiat”.

As John Bercow began proceedings to prorogue parliament, a group of opposition MPs carrying signs reading “silenced” drowned out Black Rod as she tried to address the Speaker, a ritual that initiates the suspension.

Several MPs were also involved in an altercation near the Speaker’s chair, as they attempted to prevent him leaving his seat and attending the House of Lords, the next step in the formalities required for the suspension of parliament.

One Labour MP threw himself across Bercow’s chair in protest at the shutting down of parliament. Lloyd Russell-Moyle tried to block the Speaker by lying across him momentarily to stop him leaving to the House of Lords in the official ceremony to prorogue parliament. Other Labour colleagues, including the shadow women and equalities minister, Dawn Butler, and the backbencher Clive Lewis held up posters that read “silenced”.

As Russell-Moyle was pushed away by a member of Commons staff, the Green party leader, Caroline Lucas, was seen to tumble as MPs still sitting in the chamber in the early hours of Tuesday morning started heckling and shouting.

Lewis tweeted that the group of MPs had been trying to re-enact an event from 1629 when the Speaker was pinned to his chair to prevent the prorogation of parliament. 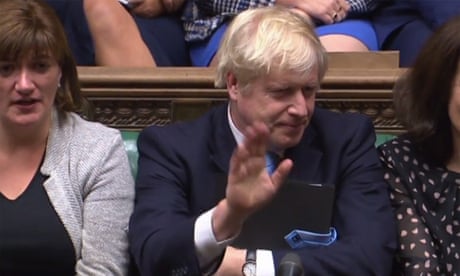 Cries of “shame on you” rose from the opposition benches as government MPs left the chamber. Labour MPs, who remained in their seats after government MPs and the Speaker had left to attend the House of Lords, sang the Red Flag, SNP MPs Scots Wha Hae and Plaid Cymru MPs Calon Lân, with harmonies.

Russell-Moyle, the MP for Brighton Kemptown, is no stranger to parliamentary stunts. In December 2018, he grabbed the ceremonial mace after Theresa May postponed a key Brexit debate and vote on her withdrawal bill to the new year.

The chaos unfolded in the early hours of Tuesday morning, after a day of high drama in which Boris Johnson lost his sixth parliamentary vote in as many days and Bercow announced his impending retirement as Speaker.

As the prorogation got under way, Bercow expressed his anger, saying it was “not a normal prorogation”.

“It is not typical. It is not standard. It’s one of the longest for decades and it represents, not just in the minds of many colleagues, but huge numbers of people outside, an act of executive fiat,” he said.

As Bercow spoke, opposition MPs held signs reading “silenced” and some attempted to block his way.

One of those involved in the protest, Alex Sobel, Labour MP for Leeds North West, said the action “echoes the action of members to try and prevent the speaker proroguing at the request of Charles I”, referring to the 1629 incident when MPs, furious at the closure of parliament, left their seats and sat on the Speaker, preventing him from rising and closing the house, allowing MPs to pass a number of motions condemning the king.

Bercow was not sat on, and was soon allowed to pass through the House of Commons to attend the House of Lords.

The Speaker returned to the House of Commons to confirm the prorogation of parliament, with only a handful of Conservative MPs present and packed opposition benches.

As parliament wrapped up at about 2am, opposition MPs lined up to shake Bercow’s hand.

Many MPs tweeted their anger, though the reason for their fury was split down party lines, with Conservative MPs appalled at the opposition MPs who had tried to stop the Speaker leaving his seat and opposition MPs angry at the proroguing of parliament.

The pandemonium capped a rancorous day in parliament during which Johnson’s options narrowed as parliament’s bill to prevent a no-deal Brexit on 31 October received royal assent and passed into law.

Later the prime minister once again failed in his attempt to force an early general election after opposition MPs abstained from the vote and the Labour leader, Jeremy Corbyn, said he would not let his party walk into “traps laid by this prime minister”.

Parliament also voted by 311 to 302 for Johnson to publish Operation Yellowhammer documents detailing the government’s no-deal Brexit plans, after a leaked version from early August warned of possible food and medicine shortages.

The motion, brought by the former Tory MP Dominic Grieve, also directed Johnson to disclose messages relating to the suspension of parliament sent by his senior adviser, Dominic Cummings and various other aides on WhatsApp, Facebook, other social media and both their personal and professional phones. Grieve said he had information from public officials that such correspondence contained a “scandal”.

But Downing Street sources suggested Johnson’s advisers would resort to legal action rather than hand over their communications. Any refusal to comply could put them and the government in contempt of parliament.

Sorgente: Brexit: chants of ‘shame’ as suspension of parliament descends into chaos | Politics | The Guardian