The rehabilitation of Tony Blair? | News | The Guardian 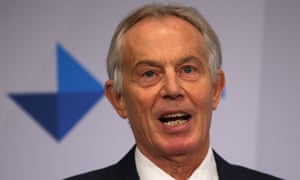 Tony Blair’s legacy since leaving office has been the subject of heated debate both within the Labour party and the country at large. As Paul Lewis reports, his re-entry into the national debate on Brexit comes at a time of a crisis of trust in British politics and a rise in populism. Also today: Jim Waterson on the Saudi investment in the Evening Standard

Tony Blair is Labour’s most electorally successful prime minister, but his legacy has been the source of bitter rows ever since he left office. Now he is back, and making a series of impassioned interventions on Brexit.

He has recently released a video defending his record as prime minister after Jeremy Corbyn lumped together Blair’s Labour government with the Conservatives under Margaret Thatcher and David Cameron.

Paul Lewis has been leading a series on populism for the Guardian and recently interviewed Blair in front of a live audience. He reflects on how the former prime minister is attempting to rehabilitate his reputation.

Also today: Jim Waterson on the Saudi investment in the London Evening Standard.

Sorgente: The rehabilitation of Tony Blair? | News | The Guardian