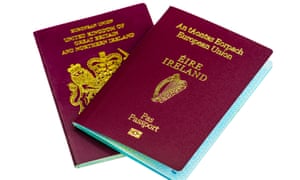 The rights of Irish people in the UK and British citizens in Ireland are to be guaranteed in a Brexit side deal to be signed by the countries’ two governments.

Sources say the memorandum of understanding will put the rights already conferred on citizens of both nations under the common travel area (CTA) on to a more secure footing.

The deal will be signed by David Lidington, the Cabinet Office minister, and Ireland’s deputy prime minister, Simon Coveney, in a meeting in London on Wednesday afternoon before the British-Irish intergovernmental conference.

The conference was organised by the two governments after the killing of the journalist Lyra McKee by dissident Irish terrorists as part of a drive to restore power-sharing in Northern Ireland.

But the deal is the result of two years of work to ensure the rights both have under the CTA agreements and under EU freedom of movement are protected after Brexit.

Irish people have more rights than other EU citizens in Britain because of the historical ties between the two countries, such as the right to vote and the right to stand for public office, including Westminster. These rights are reciprocated for British people settled in Ireland.

The British and Irish governments had already stated that citizens who had settled in one another’s countries would be treated differently to other EU citizens. Britain stated explicitly, for instance, that the Irish did not have to apply for “settled status” in the UK, something citizens from the rest of the EU are required to do.

Sources have confirmed that Wednesday’s deal will mean arrangements to ensure reciprocal access to social insurance, child benefit and pensions continues, with a further deal promised on access to education and healthcare.

It has been widely assumed that this comes from the special historical links between the two countries and specifically the 1949 Ireland Act, which officially ended the country’s status as a British dominion, and a further series of immigration laws and bilateral deals.

Bernard Ryan, professor of migration law at Leicester University, raised concerns as far back as 2016 arguing bilateral statements might not have much legal value.

The CTA has its roots in the deal agreed after Ireland gained independence from the UK in the 1920s and was further cemented through a series of laws including the Ireland Act of 1949 which stated Ireland “is not a foreign country for the purposes of any law in force in any part of the United Kingdom”.

Further legislation gave the Irish the right to vote in all British elections, something that eludes other EU citizens, with reciprocal rights for Britons in Ireland.

However legal experts raised concerns that the full range of employment and social rights were not guaranteed under law and were merely codified in a series of bilateral declarations.