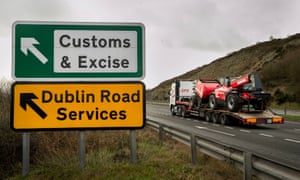 Tariffs will be slashed to zero on 87% of imports to the UK as part of a temporary no-deal plan to prevent a £9bn price shock to business and consumers, the government has announced.

But tariffs will apply to certain goods including beef, lamb, pork, poultry and some dairy products to “support farmers and producers who have historically been protected through high EU tariffs”.

The announcements were made in a last ditch attempt to concentrate the minds of MPs who will be voting later on Wednesday to reject a no-deal Brexit after Theresa May’s humiliating 149-vote defeat.

The government described the announcement as a “modest liberalisation” of tariffs designed to minimise disruption to business and price shock in the supermarkets.

The measures also raised immediate concerns about Northern Ireland being turned into a smugglers’ paradise after it was revealed that tariffs would not apply to goods crossing from the Republic of Ireland into Northern Ireland.

The Irish European affairs minister, Helen McEntee, said the prospect of tariffs on beef and dairy exports to the UK from the republic would be “absolutely disastrous for Irish agriculture”.

Goods from the EU are currently tariff free but in case of a no-deal Brexit, World Trade Organisation taxes would have been the default position without this intervention. 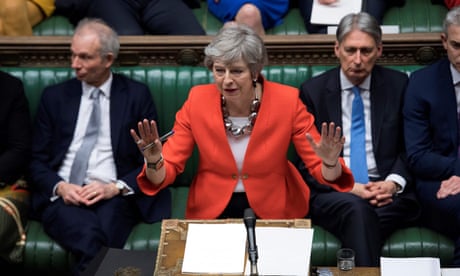 Wednesday’s announcement on Northern Ireland did not include any disclosures about security on the border but it is known that the Police Service of Northern Ireland and the Garda in Ireland are concerned there could be a lucrative “Brexit dividend” for existing criminal networks in the country.

Recent reports have shown criminal gangs involved in smuggling of cigarettes and other goods in Ireland come from all over the world including Asia and the Baltic states.

The government also announced it would “not introduce any new checks or controls on goods moving to Ireland or Northern Ireland” including no customs declarations for “normal goods”.

The new tariff schedule would apply from 11pm on 29 March in the event of a crash out of the EU and would be in place for up to 12 months.

Other rates announced on Wednesday include 60% of the existing EU rate on poultry, butter 32%, cheddar cheese 13%, fish/seafood 11.9%, and 83% on milled and semi-milled grain. The existing EU tariff applied to non-EU lamb will be applied in the UK.

A tariff of 11.3% of the existing EU rate would apply to finished motor cars and trucks with 8% on certain textiles and 8.2% on footwear.

The trade minister, George Hollingbery, said the measures would protect the poorest families in Britain against price rises. “If we leave without a deal, we will set the majority of our import tariffs to zero while maintaining tariffs for the most sensitive industries.”

He said the approach would “help to support British jobs and avoid potential price spikes that would hit the poorest household the hardest”.

Responding to the announcement, Carolyn Fairbairn, director-general of the Confederation of British Industry, described the prospect of no deal as a “sledgehammer for the economy”.

“This tells us everything that is wrong with a no-deal scenario. What we are hearing is the biggest change in terms of trade this country has faced since the mid-19th century being imposed on this country with no consultation with business, no time to prepare,” she told the BBC’s Today programme.

“This is no way to run a country. What we potentially are going to see is this imposition of new terms of trade at the same time as business is blocked out of its closest trading partner. This is a sledgehammer for our economy.”

In relation to Northern Ireland, the government said its reason for waiving the regime in the region was to avoid a hard border on the island of Ireland. It added if it crashed out of the EU without a deal, the government will “enter discussions urgently with the EU and Ireland” over longer term border arrangements.

The no-checks approach, which has been dubbed an “honesty-box system” in Northern Ireland, would be a “strictly temporary, unilateral approach it would take to avoid a hard border if the UK were to leave the EU without a deal”.

A “small number” of checks would apply on the border between Northern Ireland and Great Britain, however, the government insisted this would not entail any controls down the Irish Sea.

In addition, “regulated plant material from outside the EU and high-risk EU plant material will require certification and pre-notification” before arriving in the UK including Northern Ireland.

It is understood there will be little incentive for legitimate exporters to shift operations from Dublin port to the “backdoor” tariff-free Northern Ireland ports and airports because they will have to register their goods in any event with a customs declaration.

Documents would also be needed for goods such as endangered species and hazardous chemicals but this would not involve any infrastructure or checks at the border in Northern Ireland, the government said.

Sorgente: Government to slash tariffs to zero in case of no-deal Brexit | Politics | The Guardian