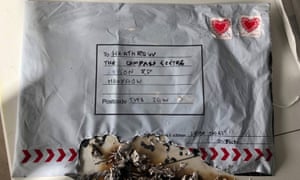 Three improvised explosive devices have been found at separate transport hubs in London in what Scotland Yard believes to be a series of linked incidents.

The Metropolitan police’s counter-terrorism command launched an investigation after the packages were found in the post room at Waterloo railway station, City Aviation House at City airport and the Compass Centre on the grounds of Heathrow.

Irish police are assisting the Met with the investigation, the Garda Síochána said. It is understood that at least two of the packages had Republic of Ireland postage stamps.

A source added that, although the belief was that the packages were sent from Ireland, investigators were not jumping to the conclusion that the motive was to further the cause of Irish republican terrorists. Police believe whoever sent the packages did not mean to kill.

The A4-sized white postal bags containing yellow Jiffy bags were found to be capable of igniting a small fire when opened, the Met said.

The incidents are being treated as linked. No arrests have been made and inquiries are continuing.

The Jiffy bag thought to have been sent to Waterloo appears to have its sender’s address as Bus Éireann, Dublin, but the bus operator said police had not been in touch. “Bus Éireann are currently not aware of this and we have no further comment,” a spokeswoman said. At least two of the packages appeared to have Irish “love and marriage stamps” on, apparently bearing the words “Love Éire N”.

An Irish security source said “violent dissident republicans” were the most likely source of the explosive devices, pointing to previous letter bomb attacks on targets in Britain and Northern Ireland in 2013 and 2014.

“The so-called dissidents have tried this before when they sent letter bombs that included army recruit centres in England and political figures. They have failed to mount an actual attack in England since 2001 and these are ‘cheap’ ways of causing terror across the Irish Sea,” the source added.

Among the politicians targeted in the autumn of 2013 was the then Northern Ireland Secretary, Theresa Villiers. A letter bomb to her was discovered in the post room of Stormont Castle outside Belfast.

At about 9.55am, officers received a report of a suspicious package at the Compass Centre at Heathrow. The package was opened by staff at the building, causing the device to ignite. This resulted in part of the package burning. No one was injured and flights were not affected.

At about 11.40am, British Transport Police were called to reports of a suspicious package in the post room at Waterloo. The package was not opened. Specialist officers made the device safe.

No one was injured and the station was not evacuated, but cordons were put in place around a small area outside the station on Cab Road. Rail services continued to operate as normal.

At about 12.10pm, police were called to a report of a suspicious package at City Aviation House in Royal Docks, Newham. Staff were evacuated from the building as a precaution. The package was not opened and no one was injured. Specialist officers made the device safe. The building was later reopened.

As a precaution, DLR services to London City airport were suspended but later restarted. Flights to and from the airport were not affected.

The mayor of London, Sadiq Khan, said an investigation had been launched. “The police are treating the incidents as linked, but are keeping an open mind regarding the motives,” he said. Khan confirmed there were no injuries and urged the public to report any suspect packages to the police.

Pictures thought to show the packages sent to Heathrow and Waterlooemerged on Tuesday. One of the images was of a partially burned package addressed to the airport.

Waterloo is the busiest railway station in the UK, with 94 million passengers in 2017-18. Its owner, Network Rail, would not comment on the incident on Tuesday evening. Offices for the public sector company’s workers based at the station were evacuated.

London City airport said City Aviation House had reopened after staff were evacuated at about 12.15pm on Tuesday. “Specialist police officers dealt with the device, which did not affect flight operations. The airport terminal remained open throughout,” it said.

The building is used by airport staff and is near the passenger terminal.