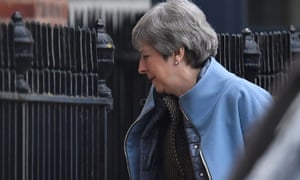 Theresa May’s government has been plunged into constitutional chaos after the Speaker blocked the prime minister from asking MPs to vote on her Brexit deal for a third time unless it had fundamentally changed.

With 11 days to go until Britain is due to leave the EU, May was forced to pull her plans for another meaningful vote because John Bercow said she could not ask MPs to pass the same deal, after they rejected it twice by huge margins. EU officials, meanwhile, were considering offering her a new date for a delayed Brexit to resolve the crisis.

Quoting from the guide to parliamentary procedure, Erskine May, Bercow said the question “may not be brought forward again during the same session” and that it was a “strong and longstanding convention” dating back to 1604. It must be “not different in terms of wording, but different in terms of substance”, he said, suggesting there must be a change in what the EU is offering.

Bercow’s surprise intervention means May is likely to have to go to Thursday’s Brussels summit with a request for a long extension to article 50, which could mean the UK has to spend more than £100m on participating in European parliament elections.

During the delay, parliament would have to make a decision on how to break the deadlock, potentially with a second referendum, an election or a cross-party proposal for a softer Brexit. Alternatively, government sources suggested May could negotiate a lengthy extension with the EU, with a “get-out clause” enabling it to be cut short if her Brexit deal is passed by parliament before the European parliamentary elections.

One option under consideration is some kind of “paving vote” to set aside the convention if a majority in the House of Commons agreed they wanted to look at the deal again.

Sources in Brussels suggested the EU may offer May a helping hand by agreeing on a new delayed Brexit date at the summit, which could allow her to argue next week that the deal is sufficiently different to merit a third vote in parliament.

Some hardline Conservative Brexit supporters were pleased that May’s efforts to pass her deal were being frustrated, hoping the EU would veto an extension and the UK would be forced to exit without a deal on 29 March. Government sources downplayed such a scenario, saying the EU was highly likely to grant an extension.

A government source said: “It seems clear that the Speaker’s motive here is to rule out a meaningful vote this week, which also stands in the way of a securing a shorter extension.

“It leads you to believe what he really wants is a longer extension, where parliament will take over the process and force a softer form of Brexit. But anyone who thinks that this makes no deal more likely is mistaken – the Speaker wouldn’t have done it if it did.”

No 10 and ministers were locked in debate on Monday night on how to get around the Speaker’s ruling in order to have another meaningful vote next week. The government was initially blindsided by Bercow’s pronouncement and unable to comment on what May would do next as it had not been “forewarned”. By Monday evening they would only say that the government “noted” the Speaker’s statement, adding: “This is something that requires proper consideration.”

But supporters of May’s deal were openly furious, with Robert Buckland, who as solicitor general is one of May’s chief law officers, saying it amounted to a “constitutional crisis”. He suggested No 10 might have to consider the drastic step of ending the parliamentary session early and restarting a new session, although government sources suggested this would not be an easy option.

“Frankly we could have done without this, but it’s something we’re going to have to negotiate with and deal with,” he told BBC News.

Another minister, Rory Stewart, appeared to liken the Speaker to Humpty Dumpty saying his attitude was that a rule “means just what I choose it to mean”. Other senior government figures described Downing St as being in a state of shock. “It’s miserable,” one said. “I think the first thing is the government having to come to terms with it.” 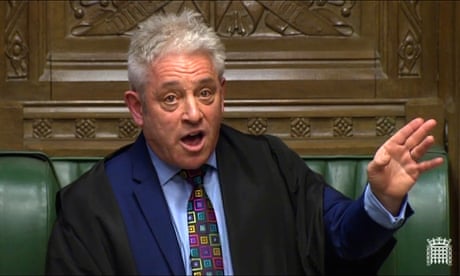 What has John Bercow done now?

A number of Conservative MPs said they suspected Bercow’s underlying reason for refusing another vote this week was an attempt to bounce the government into seeking a longer extension to article 50 from the EU, allowing parliament to seize control of the Brexit process.

However, others suggested the Speaker’s ruling could be helpful to May because there was little chance her deal would have passed this week anyway.

Downing Street had made it clear the prime minister would only have put the deal to another vote with the backing of the Democratic Unionist party and more Conservatives, but sources close to the talks told the Guardian a breakthrough was unlikely before the end of this week.

“It is looking extremely unlikely that there is a clear path through to a deal this week. The reality is that practically to get it signed off by all parties, we would have had to have a deal concluded by today to get it through before Thursday’s EU council,” said one DUP source.

The angriest reaction to Bercow’s announcement came from Conservative Brexiters who had switched to vote for May’s deal and were among those coaxing colleagues to come over the line with them at the next opportunity. Sir Graham Brady, the chair of the 1922 Committee of backbenchers, said the deal was “clearly gathering support” and it was essential that parliament was given another opportunity to vote.

The former children’s minister Tim Loughton said it was the “most serious constitutional crisis I have seen in my 22 years in this house”.

“Just when it looked like order was about to finally emerge from the chaos, and there was real momentum building to get sufficient support to back the deal, now Bercow has fashioned a way to reassert the chaos,” he said.