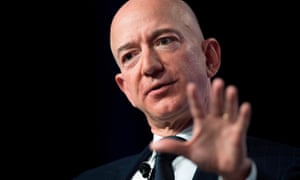 A sprawling international scandal involving Jeff Bezos – the owner of Amazon and world’s richest man – and allegations of “extortion and blackmail” by a tabloid publisher threatened on Friday to also engulf Donald Trump as several key questions went unanswered.

Bezos alleges that David Pecker, the owner of the National Enquirer and a longtime friend of the US president, warned him he would publish revealing intimate photos of him unless he stopped investigating how the tabloid obtained text messages exposing his extramarital affair.

Pecker is the chief executive of American Media Inc (AMI), which said on Friday that it “acted lawfully” in its reporting on Bezos and that it would “thoroughly investigate” his claims of blackmail and take “whatever appropriate action is necessary”.

But Pecker is also close to Trump, and AMI has admitted in the past that it engaged in a practice known as “catch-and-kill” – suppressing potentially damaging stories – to help Trump become president. Trump has also waged a running war of words against Bezos, owner of the Washington Post, which he frequently denounces as part of the “fake news media”.

The White House remained silent on the matter but two more threads raised questions about a potential association. In a TV interview, a Post reporter claimed that Bezos’s camp believes the National Enquirer’s conduct might have been politically motivated and that a “government entity” might have got hold of his text messages, though which government might be involved was not indicated.

Bezos himself, laying out his allegations in an extraordinary 2,000-word blogpost, noted that Pecker and AMI have been “investigated for various actions they’ve taken on behalf of the Saudi Government”. He added that “for reasons still to be better understood, the Saudi angle seems to hit a particularly sensitive nerve”.

It was not immediately clear why Bezos made the Saudi connection, but political commentators were quick to recall that Jamal Khashoggi, a Washington Post columnist and critic of the Saudi government, was murdered at the Saudi consulate in Istanbul, focusing often critical attention on Trump’s cosy relationship with the kingdom.

“If indeed AMI’s threats and acts of intimidation toward the press were coordinated with the president or done at his request, it would represent a perilous escalation of the president’s war on the first amendment and the role of a free press. Congress should act immediately to investigate these serious allegations.” 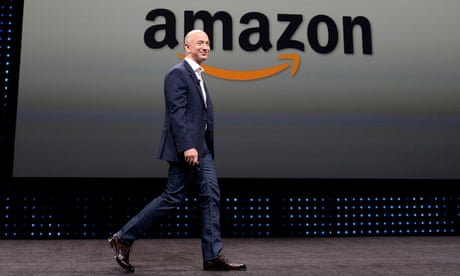 The intrigue, which has shaken the worlds of New York media and Washington politics, began on 9 January when Bezos announced on Twitter that he was getting divorced from his wife of 25 years, novelist MacKenzie Bezos.

A day later, the National Enquirer published a story about the billionaire Amazon chief executive’s relationship with Lauren Sanchez, a former TV anchor who is also married. It reported that Bezos sent “sleazy text messages and gushing love notes” to Sanchez. He wrote: “I am crazy about you. All of you.”

Trump did not miss the chance to gloat over his perceived adversary and praise the Enquirer. He tweeted: “So sorry to hear the news about Jeff Bozo being taken down by a competitor whose reporting, I understand, is far more accurate than the reporting in his lobbyist newspaper, the Amazon Washington Post. Hopefully the paper will soon be placed in better & more responsible hands!”

Bezos, meanwhile, hired a team of private investigators to find out how the tabloid acquired the texts and photos. Bezos writes in his blogpost on Medium that he learned Pecker was “apoplectic” about the investigation. AMI later approached Bezos’s representatives with an offer. “They said they had more of my text messages and photos that they would publish if we didn’t stop our investigation,” he wrote.

Bezos also wrote that this week, the tabloid’s editor, Dylan Howard, emailed a lawyer for Bezos’s longtime security consultant to describe photos including a “below-the-belt selfie” of Bezos and him in tight boxer shorts and wearing only a towel, as well as several revealing photos of Sanchez.

According to the emails released by Bezos, AMI offered a formal deal: the tabloid would agree to not publish the photos if Bezos and his investigators would release a public statement “affirming that they have no knowledge or basis” to suggest the Enquirer’s coverage was “politically motivated or influenced by political forces”.

But in a move that has earned widespread public praise, Bezos said he decided to publish the emails sent to his team “rather than capitulate to extortion and blackmail”, despite the “personal cost and embarrassment they threaten”.

“Of course I don’t want personal photos published, but I also won’t participate in their well-known practice of blackmail, political favors, political attacks, and corruption. I prefer to stand up, roll this log over, and see what crawls out.”

Other journalists appeared to back Bezos’s allegations about AMI tactics. Ronan Farrow, an investigative reporter at HBO and the New Yorker, tweeted:“I and at least one other prominent journalist involved in breaking stories about the National Enquirer’s arrangement with Trump fielded similar ‘stop digging or we’ll ruin you’ blackmail efforts from AMI.”

Pecker and AMI have a storied relationship with Trump, though it was said to have cooled in recent months. The company recently admitted secretly aiding Trump’s election campaign by paying $150,000 to a Playboy model for the rights to her story about an alleged affair with the then candidate. AMI then suppressed the story until after the 2016 election.

The justice department agreed last September to a non-prosecution agreement with AMI, which requires the company and some top executives, including Pecker and Howard, to cooperate with authorities.

But in the wake of the new revelations the Associated Press has reported that federal investigators are now looking at whether the recent revelations mean AMI has violated that agreement. The agreement requires AMI commit no crimes for three years.